More of us are travelling by train than at any time since the 1920s and the renewed interest in this once neglected transport mode is reflected in its increasingly reinvigorated architecture.

As the shop windows of the rail network, many stations are being built, rebuilt and modernised but with aesthetics in mind, not just practicalities.

Whether highly styled or simple in scope, many new and revitalised stations have been designed to maximise light. That’s thanks to the use of translucent and transparent materials – primarily glass, ETFE and polycarbonate – ensuring today’s railway buildings are bright and user-friendly.

But do light-embracing materials influence architectural style, or does design dictate the use of the materials?

Manchester Victoria station is being transformed into a fine example of the heroic station. Architects at BDP are transforming the leaky, unloved, shabby looking 19th century ‘Cinderella’ station – once voted the ‘worst in Britain’ – into a fitting gateway for the city.

Built in 1844, its grade II listed Victorian buildings are being sympathetically restored and the whole station will be bathed in light thanks to BDP’s vast, all-encompassing, gracefully flowing steel and ETFE roof. Covering some 10,000 sq m, it’s one of the biggest in the country.

The practice’s stunning, award-winning design brings this key interchange into the 21st century, just as it breathed new life into Manchester Piccadilly, the city’s other great station, in 2002.

“Creating a large, transparent roof was great for passengers but a huge challenge,” he says.

“The shape of the roof responds to the geometries of the building. You get these amazing twists in shape because it flows from about 5m high above the rail lines on one side and flows up to a height of 18m and merges into historic buildings. There’s no doubt the lines and curves really add drama.”

BDP gained experience with ETFE at Piccadilly and it was the material of choice for Victoria. Jenkins says: “The flexibility of ETFE is a huge part of making the roof work. Each of the 400 panels are uniquely shaped, and this could only be achieved through 3D modelling software and Building Information Modelling (BIM) techniques. It liberates the architectural thought process. I’d say it would be extremely challenging – if not impossible – to achieve this in glass.”

ETFE brings other massive advantages. It is self-cleaning, it won’t shatter if there’s an explosion and doesn’t combust or drip if there’s a fire. Being inert, it doesn’t degrade or discolour and its lightness means less steel is needed for support.

“In other parts of the station we used clear polycarbonate panels, for smaller platform canopies outside the roof for example. Modern polycarbonate looks like glass, doesn’t discolour and is used a lot in refurbished heritage roofs.”

“For me the creation of Grimshaw’s Waterloo International station in the early 90s really marked a return to grand design in this sector. Now I see two styles emerging. One with more angular planes forming smaller stations and then the grand, heroic structures of larger buildings. There was always a difference in style between the two scales and that’s still true today.”

Although working on a slightly smaller scale, architects at Jefferson Sheard thought big for the striking bus-rail interchange at Liverpool South Parkway in Garston. A sweeping, concave, all-glass frontage that greets and envelops travellers is constructed from a frameless, bolt-fixed, glass system on steel supports.

“We’re proud of our award-winning design and its great looks, but it’s ultimately practical. Liverpool South Parkway comprises two railway stations – one for Merseyrail’s metro and the other on the mainline to London – joined together with a bus station at the front.”

The shape of the building, completed in 2011, is designed to encompass various uses at various levels under one roof.

“The roof’s curvilinear form reduces the impact of the changes in level, creating the feeling of one continuous building, enhanced through the use of full-height, transparent glazing systems and semi-opaque glass panels that shape and define the concourse and circulation areas.”

Railway stations really benefit from the use of clear and translucent materials, he says.

“Increased natural light provides improved perception of safety while better visibility between spaces assists orientation and deters crime. It also reduces the carbon footprint. As the majority of railway concourse and platform areas are unheated, a reduced need for artificial lighting offers great energy savings. Glass and ETFE lend themselves to this and I see continued use of these materials. ETFE will gain in popularity because it is cost-effective and lightweight, which brings structural savings.”

On some platforms and the footbridge the architects also used Kalwal, a translucent composite material that allows light to reach the passengers while blocking out views of surrounding industrial buildings.

Stations don’t have to be huge to achieve impact, Rhys Jones argues.

“The very attractive-looking St Helen’s Central station in Merseyside is a very ambitious use of glass in a small space.”

In Chelsea, architect Nigel Horrell of Dawson Horrell Architects also believes small can be beautiful. As assistant project architect on the Jubilee Line Extension in the 1990s, he worked with the late, great Roland Paoletti, the driving force behind 11 dramatic, award-winning stations, each designed by a separate architect and cleverly utilising glass.

Horrell has also designed his own compact classics. Imperial Wharf is a smart-looking station built in 2009 for the London Overground network in South West London and features a distinctive green-hued, low-E glass lift tower.

“The original idea of using the low-E glass was to keep the lift shaft cool, but then we decided to turn its natural greenish colour into a design feature,” he explains.

At South East London’s Deptford station, a jumble of unloved, dark old buildings was replaced with his attractive, bright, modern design in 2012. It cleverly exploits a glass and steel structure enabling people to ‘see through’ the station to marvel at the historic 1836 brick viaduct and unique carriage ramp behind it, part of London’s oldest railway architecture.

Deptford uses inch-thick glass in pretty much the largest sized plates you can get and features six large ETFE spans in the roof enabling a lighter steel framework to be used.

“Glass is great for urban stations. The transparency creates a sense of security – there are no dark corners for people to hide behind. The glass you can use is dependent on the design, strength and quality of the steel. Huge advances in computer design have redefined architecture by enabling us to create smarter steelwork and more flexible and sophisticated use of glass. It’s opened up exciting architectural possibilities for railway buildings, even smaller ones.

“Railway stations are big spaces and they need light. In this respect ETFE is useful because it can cover much greater spans than glass.”

“We’ve entered a new golden age of railway design, with architects involved more and given some design freedom by competing railway companies. To my mind, each station is unique and has to be designed that way.”

Julian Ross, author of the book Railway Stations: Planning, Design, and Management, has a different view:

“In today’s railway, stations increasingly play a major role. Big, high-profile stations like King’s Cross have become splendid commercial emporia because people are willing to pay for them. There’s also room for bespoke architecture in some middle-sized stations linked to commercial development or regeneration.

“However, most stations have to be practical and offer value for money. Glass and translucent materials are ideal for them because they’re cost-effective and help deliver important practical criteria – great visibility, security and a bright and welcoming ambience.

“Such buildings will necessarily adopt simpler, more modular forms but this does not exclude good design – all of Network Rail’s stations have architectural input, and aren’t just put together by an engineer.”

As examples, he cites the new station designs destined for the outer ends of Crossrail, which are due to be up and running in 2018.

At the other extreme, however, glass and translucent materials are taking the passenger experience to an altogether higher level – as larger-than-life artworks.

As part of a £7 million makeover, concrete-roofed Sunderland station now has a 140m long ‘light wall’ running along the length of a long-disused platform. Composed of hundreds of individually lit glass bricks, it’s effectively a giant video screen featuring silhouetted ‘passengers’ moving along it. When a train pulls in and leaves, the figures disappear.

At Crossrail’s planned Paddington station concourse, passengers gazing upwards will see clouds dreamily drift across its glass roof, their type and mood changing with the conditions outside – a 120m-long piece of art!

Who says the romance of rail is dead? 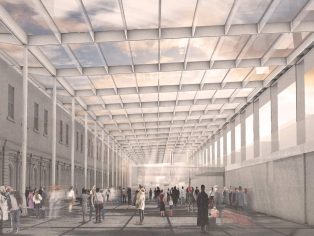 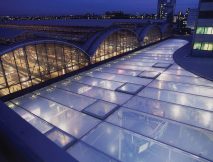 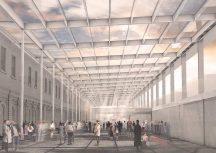 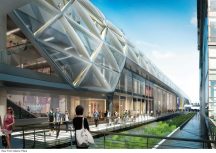 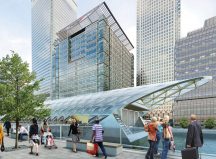 © Crossrail Ltd The new Crossrail station being built at Canary Wharf is bathed in light, thanks to its ETFE-clad roof 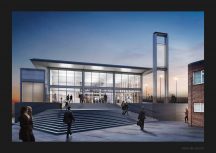 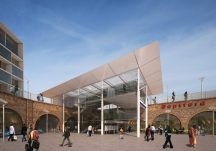 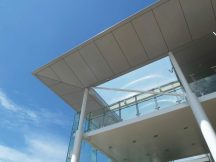 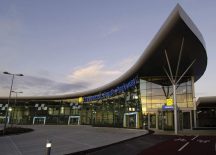