The tidal power lagoon in Swansea Bay will trigger major placemaking benefits. It will be a catalyst for city growth and urban regeneration of the Swansea Bay City region, following publication of the independent government review that recommends the go-ahead.

The masterplan for the lagoon rejuvenates an area of seafront that has been cut off from the public for over a century. It will link to Swansea port and Swansea University’s new waterside campus, providing community and sports facilities and public realm connecting to the city centre.

“On top of providing a new generation of carbon-free energy, the tidal lagoon is visionary placemaking infrastructure,” says Alister Kratt, board director of LDA Design. “In uncertain times, this kind of investment in a pioneering UK industry shows how we could design our way to a Brexit that works for everyone. The lagoon utilises a broad range of creative resources to deliver new technology and regeneration at the same time.”

LDA Design are working with Tidal Lagoon Power as masterplanners and lead designers for the Swansea Bay project, sea and landside. LDA Design are also consultants for the proposed lagoon fleet.

The tidal lagoon forms a U-shaped breakwater built across the bay. Itprovides for a new maritime park, extending the full length of the impounding sea wall and intertidal shore, with coastal recreation assets such as a national sailing centre, and a new beach and saltwater marsh.

Swansea Bay Tidal Lagoon is seen as the pathfinder for a fleet of five plants in the UK. It could unlock a multibillion-pound series of projects which could provide about a tenth of the UK’s electricity needs and regeneration benefits for communities around the country.

Alister Kratt presented to the independent Hendry Review in 2016 on the design, environmental and regeneration merits of the Swansea tidal lagoon and the wider lagoon fleet. 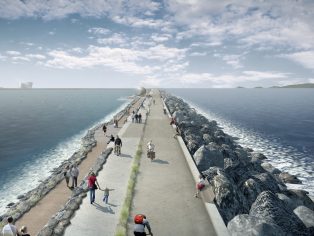