Tate Harmer has just completed the extension of a family house in Shepherds Bush, west London, using exposed timber throughout the project, from the floorboards through to the structural overhead beams.

The extension has a distinctive geometric, semi-arched profile, which is carried through the building, creating an arcaded affect. The arches lead onto a cantilevered covered patio space, subtlety breaking down the boundary between inside and out.

The use of the 45-degree angle, a design feature driven by a local planning bylaw, is one example of how the functional and the aesthetic merge throughout the project.

The exposed structural wooden beams have been made into an integral design feature of the living space. Rooflights slot, at regular intervals, between the beams, which themselves extend into bookcases, creating seamless built-in cabinetry.

Glue laminated timber (glulam) was used for the beams for its weight-to-strength ratio, but also brings warmth to the project. Used as a steel alternative in 70s and 80s industrial building, it rarely features in domestic buildings.

The floor is made from engineered hardwood, with under floor heating installed below, adding a subtle variation in tone to the overhead structures. A darker stain is used to accentuate the end doors and to frame the windows. The walls of the extension have been kept white to offset the timber and the kitchen units incorporate primary colours such as red and blue into the scheme. 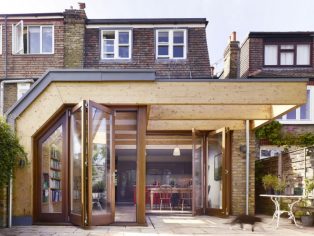 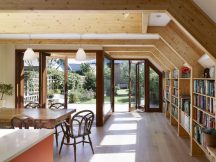