On Monday 1 June the London Festival of Architecture (LFA) returns with its annual, city-wide celebration of the capital’s rich architectural landscape. Through a programme of over 240 events that reach from the city centre to the far-flung corners of London, the festival is a platform for discussing, discovering and thinking about architecture.

The first week of the festival (Monday 1 – Sunday 7 June) kicks off with the Focus Country, Ireland, and New Horizon_architecture from Ireland opening two pavilions built by four Irish practices as part of a year-long initiative from ID2015 to promote Irish Design globally. Located in Lewis Cubitt Square, King’s Cross, these pavilions will play host to talks and workshops throughout the festival, and will provide a visual reminder of the international influences that inform London’s architecture. The Red Pavilion (by TAKA, Clancy Moore and Steve Larkin) explores architecture’s role as a background to the activities it contains, and the Yellow Pavilion (by Hall McKnight) explores how the phenomenon of the city is assembled from individual pieces, including bricks from a street in Belfast.

In response to this year’s theme of ‘Work In Progress’, the festival invites members of the public to consider the changing nature of workplace, encouraging them to question ideas such as whether co-working spaces mark the future of the workplace, and how workplace can influence well-being. The pivotal role of architects in the development of the workplace, and thus the landscape of the city, will be highlighted to the public in an engaging and varied way.

‘With so much development going on across the capital, Londoners are more acutely aware of architecture and its impact than ever before. This year’s London Festival of Architecture promises some fascinating insights and debate about the challenges being addressed by the men and women who have designs on our cities.’

TREEXOFFICE
1-30 June, Hoxton Square
TREExOFFICE is a project by Australian American artist Natalie Jeremijenko in collaboration with artists Shuster + Moseley, architects Tate Harmer and briefing architects Gensler. In the canopy of an urban tree, TREExOFFICE offers an alternative to the conventional working space and economy. Acting as its own landlord, the tree offers sanctuary, a power supply, and free wifi amongst the bustle of East London.

The project has been brought to Hoxton Square by Groundwork London, Arts Admin & Hackney Council as part of the Park Hack project. Park Hack is one of 11 UK projects supported by the Rethinking Parks programme, developing new approaches to sustaining and making the most of the UK’s public parks.

Vision – The Future of the Built Environment
2-3 June, Olympia Central
Held annually, Vision is the place where communities will be able to come together to discuss, debate and showcase the latest innovations and developments in architecture, design and the built environment.

Giant Dolls House Project – SHOEBOX for SHELTER
1-10 June, 10am-4pm, Shelter Café
There will be a Giant Dolls’ House project installation in the Shelter Café in Old Street. Each participant in the project is invited to make an individual dolls’ house-room of any function in an empty shoebox. The completed boxes are assembled onto a large black canvas and connected to each other with ramps, ropes and ladders to form one large sprawling series of spaces.

The Barbican Exhibition: Building a Landmark
25 May-29 November, 9am-11pm (Monday-Saturday) 10am-11pm (Sunday), Barbican Foyer
The second display in the Barbican series traces the design and construction of the estate and arts centre over three decades from the 1950s to the 1980s.

Employment Land Portfolio – Drawings of Tottenham
1-7 June, 11am-5.30pm (Weekdays) 12-4pm (Weekends), Heyne Tillett Steel
Lucinda Rogers will show a series of large works on paper that depict the workspaces, yards and skills of industrial manufacturing businesses and trades in Tottenham. The drawings will highlight the types of business that are directly threatened by Haringey Council’s plans to promote high-volume housing development in places where people work, which it describes as “restructuring the borough’s employment land portfolio”.

Film Screenings
Elephant and Castle – A Changing Landscape
6 June, 2-6pm, 85 Saint George’s Road
Siobhan Davies Dance will host an afternoon of film screenings that show the changing landscape at Elephant & Castle as it undergoes huge changes in the current redevelopment.

Finding the Formula for the Future Office
4 June, 11am-4pm, 18 Wenlock Road
Spacelab has dedicated over a decade to researching the formula for the future office. In close partnership with UCL (University College London), the team have developed a set of unique analysis techniques and software that gives new levels of insight into the spatial and social organisation of the office. Learn how by analysing the social network of an organisation alongside its spatial configuration, spaces can be tailor made to suit the organisation’s culture and needs, for now and in the future.

Architecture – Regeneration and Our Voice
1 June, 6.30-8.30pm, The Chapel at the House of St Barnabas

Why keep work in the office when we have people in the city?

4 June, 6-8pm, Algate House
These People’s Salons are highly interactive discussions with members of the public developers, policy makers, architects and planners discussing the role and experience of the public in helping shape spaces and places.

Drones, Time-lapse and Social Media: How Technology is helping to tell a deeper story about buildings

2 June, 8.30-9.30am, Architecture Association School of Architecture
Architectural photographer Paul Raftery will argues that as technology becomes more sophisticated and ever cheaper it also has the potential to revolutionise the way we view and understand the built environment. His talk will cover the different visual platforms he uses and the changing media landscape.

How Does Creativity Happen?

3 June, 7pm, Second Home
In this talk the London School of Architecture will look at innovative models for the office and the university, exploring how different working patterns can be accommodated within new spatial configurations allowed by the networked city.

Tours of ‘soil and Water, the King’s Cross Pond Club’

1-30 June, 10am-4pm, Lewis Cubitt Park
The UK’s first ever man-made fresh water bathing pond located within a working construction site at London’s King’s Cross, also doubles as a peice of Land Art. The instillation invites visitors to reconsider their relationship with nature and water within an urban city environment.

In the Home of the Architect
6 June, 12-1pm & 3-4pm, Sir John Soane’s Museum
Over the last year Soane’s private apartments have been reinstated on the second floor of his Museum. These intriguing ‘lost’ Soane interiors offer an insight into Soane’s private life and that of his wife Eliza as well as enabling today’s public for the first time to see his architectural models displayed as he intended.

7 June, 11am, Globe Pub
Where Art meets Architecture, Architectural Sculpture Walk. A fascinating City stroll exploring the unique relationship that developed between sculptor and architect at the turn of the twentieth century.

2 & 3 June, 10am-5pm, Olympia Central
A collection of work is being exhibited at Vision London from RIAI, including a ‘7 hands’ exhibition as part of Irish Design 2015 and responses to their callout for ‘Vision for the Future-Unbuilt Projects?’

7 June, 2pm-2.30pm & 14 June 7-9.30pm, Design Museum
Curated by Emmett Scanlon, Nine Live(s) tells the story of the design and occupation of nine workspaces, each of which ahs been designed by an emerging Irish architect. These activities will give a unique insight into the installation and the social lives of contemporary Ireland, and their relationships with architecture and design.

Yellow Pavilion by Hall McKnight Architects in King’s Cross, as part of ID2015’s New Horizon_architecture from Ireland, for the London Festival of Architecture 2015 ©Ed Reeve 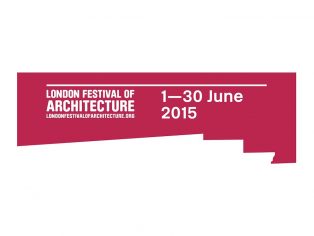