Iñaki Ábalos and Juan Herreros established the renowned architectural firm Ábalos & Herreros in Madrid in 1984. At the time, following the end of the Franco regime, architects were valued more for their technical ability than for their contributions to theoretical research. In this context, Ábalos & Herreros’s melding of design with a range of publications and curatorial projects presented a remarkable challenge to assumptions about the role of an architect.

In 2012, the Canadian Centre for Architecture obtained the Ábalos & Herreros archive, which contains documents related to more than 160 projects. The material comprises sketches, slides, models, collages, and drawings. The archive presents a compelling opportunity to reconstruct Ábalos & Herreros’s planning and design process. Each of the book’s three contributors—two of whom worked with Ábalos & Herreros—approaches the archive with specific questions, and their essays explore topics including the architects’ fascination with industrial architecture, their capacity to construct a hybrid materiality without recourse to building technology as language, and their innovative visions for landscape architecture.

While many have written about the work of Ábalos & Herreros, previous books have been based mainly on their built projects and ongoing research. AP 164: Ábalos & Herreros is the first book to draw on the firm’s archive to offer a new take on this important architectural practice.

Josef Frank – Spaces: Case Studies of Six Single-Family Houses by Mikael Bergquist and Olof Michélsen features new material and many previously unpublished images and plans. Josef Frank—Spaces will be the authoritative reference to this renowned architect’s contributions to the design of residential dwellings.

Josef Frank (1885–1967) ranks among Europe’s most significant architects of the twentieth century, and his designs for furniture and textiles have made him one of the eminent figures of modernist interior design. Though there have been many studies of Frank’s architecture previously,Josef Frank—Spaces is the first comprehensive book to look specifically at Frank’s single-family houses.

Architects Mikael Bergquist and Olof Michelsen explore the evolution of Frank’s designs for single-family homes over the years, and they investigate the influences that shaped his work, such as Adolf Loos’s “spatial plan” concept, Le Corbusier’s ideas, and Hermann Muthesius’s groundbreaking book The English House. The authors also look at Frank’s architectural concepts of movement and his use of stairs in residential buildings. The book also includes an in-depth examination of six of Frank’s houses, including both built projects—Villas Claeson and Wehtje in Falsterbo, Sweden, and Villa Beer in Vienna—and unrealized ones—House for Vienna XIII, House MS in Los Angeles, and Fantasy House 9 (Accidental House). This section includes images and plans of each of the houses and a close analysis of their specific characteristics. A complete catalog of Frank’s single-family houses rounds out the book. 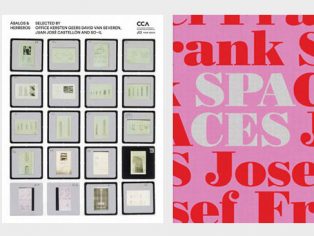