The new Laidlaw Library at the University of Leeds is an outstanding facility for undergraduate students, with social spaces, the latest technology, and more than six linear kilometres worth of books.

The £16.1 million six-storey library, which can accommodate up to 1,000 students at any one time, was designed by Manchester-based ADP architects as a “highly sustainable landmark building” that improves the students’ learning environment. Thanks to its track record in working on similar schemes, Hunter Douglas, the international leader in architectural building products, was called upon to design and manufacture the 800m2 wood grill ceiling for the undergraduate library building. A dedicated team provided expert advice to the architects and contractors on the specification and worked closely with them to ensure that any issues were resolved quickly and easily.

The ceiling comprised a pre-assembled grill of five slats each measuring 20mm x 55mm, which were threaded on to black dowels to maintain their structural integrity. An industrial-style finish was specified, so the grill ceiling fitted the bill and no acoustic materials were used to fill the 55mm gaps between the slats. Rob Grundy, Technical Manager at Hunter Douglas, said the modern design of the building meant that the ceiling in the large, light space where it was installed was stained white RAL 9010 to complement the colour of the lights and surrounding fittings.

African Ayous was specified because it’s even grain texture lends itself to being painted or stained. The wood was painted with water-based paint that contains no volatile organic solvents in the Hunter Douglas factory in The Netherlands before it was transported to the UK for installation. As standard, the wood has Flame Delay fire retardant impregnation to achieve Euro Class B-S2-D0 fire resistance.

“The result is a bright and light ceiling in a modern library,” says Rob.

“It is impressive to look at and the design complements perfectly the overall look of the scheme. We are delighted to have played a role in the development of this important building on the University of Leeds campus.” 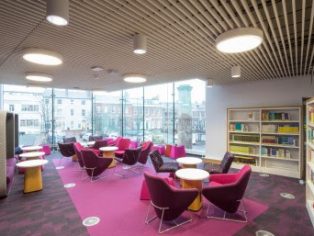