Upcoming release: “How to read modern buildings” by Will Jones

How To Read Modern Buildings by critically-acclaimed writer Will Jones takes readers on a guided tour of modern architecture through its most iconic and significant buildings.

From Art Deco and Arts and Crafts, through the International Style and Modernism to today’s environmental architecture and the rise and fall of the icon, all the major architectural movements from the 1900s to the present day are traced through their classic buildings. Examining the key architectural elements and hidden details of each style, we learn what to look out for and where to look for it.

Packed with detailed drawings, plans, and photographs, this is both a fascinating architectural history and an effective I-spy guide – a must-read for anyone with an interest in modern design and architecture.

Extract from the introduction courtesy of Bloomsbury:

“Modern buildings are about much more than the white walls, flat roofs and glass-clad skyscrapers that many would class as Modernist. In architectural terms the modern era spans a whole raft of styles and nuances, and encompasses the entire 20th century as well as the early part of the 21st. It takes in possibly the widest variety of styles of any architectural era, from the Renaissance Revival, a reversion to classical form, but using the newest industrial methods of the time, to the glamour of Art Deco, the severity of Brutalism, the quirkiness of the Avant Garde movement – and more.” 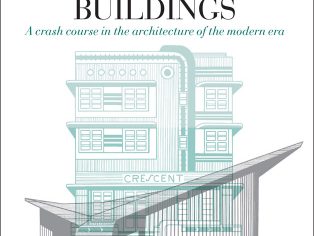