A neglected, empty building in west London is being converted into luxury apartments, thanks in no small way to the clever use of glass. Jess Unwin finds out more.

Glass and its ability to help create the light, airy and open-plan living spaces that define the aspirations of contemporary residential architecture has transformed what was once a neglected Victorian townhouse into a 21st-century des res.

Located in a tree-lined cul-de-sac within the Pembridge conservation area of west London’s Notting Hill, the mid-terrace property that is 27 Linden Gardens had certainly seen better days when Fruition Properties and HUB Architects took it on.

The building, originally five storeys, was unoccupied after a period when its many rooms had been converted for multiple occupancy use, and was “in a condition of disrepair”, according to HUB’s Jennifer Creighton.

After planning approval, work began in November 2015 to convert the property into just four apartments. Fruition Properties’ Ross Coathup, project and design manager, reveals the interior was “completely gutted” with the removal of everything, including the floors, to enable reconstruction and reconfiguration. However, from the outside, little has changed. Coathup is keen to point out: “One of the central principles of the development is the retention of the facade.”

“The design vision for number 27 is to create light and transparency within the existing Victorian facade that encompasses the new interconnected spaces and fuses with the traditional aspects of the building.”

“Primarily, we wanted to facilitate the contemporary requirements of modern living standards – more open-plan, spatial requirements. We wanted to move away from the smaller, enclosed rooms that were traditional when the building was first designed to have lots of light and space. Glass and other reflective surfaces are among the things that can make that happen.”

Using glass to partition spaces means that apartment one, a duplex spanning the lower ground and ground levels and apartment four, another duplex on the third and top floor, have a transparency that allows you to see right through from the front to the rear of the building.

However, that drive for transparency meant jumping an important safety hurdle in apartment one. Coathup explains:

“To get our front-to-back transparency on the ground floor, we needed glass that would separate the main staircase from the adjoin- ing living room, dining/kitchen space and the main entrance to the apartment.

“This needed to be fire-rated construction, which means the glass had to have insulating and integrity qualities to stop fire and radiation. That represented a challenge which required a relatively innovative answer: a frameless system of two fixed, glass walls and pivot doors that was as transparent as possible but still insulated and fire-rated.”

Creighton takes up the story:

“There are limited fire glazing systems that are appropriate for the domestic market. Other systems tended to have very heavy framing surrounding the screens and the door systems.”

After some time searching for a supplier of the right tried and tested product, and after a couple of potential solutions proved to not be what they were looking for, HUB and Fruition Properties eventually chose the Lunax system. “It ticked all the boxes,” says Creighton.

The system, which was created by a Belgian company and is sold through dealers in the UK, uses Contraflam glass, a product that met the insulation and integrity requirements HUB and Fruition Properties were after.

Supplied by Saint-Gobain subsidiary company Vetrotech, the Contraflam glass offers from 30-120 minutes of integrity and insulation (EI30-EI120 classification). This refers to the amount of time it will protect against fire, smoke and hot gases, acting as a heat shield and keeping the
non-fire side cool.

It comprises two or more sheets of toughened safety glass with the cavity between the sheets filled with a transparent intumescent gel interlayer that reacts chemically when exposed to fire and expands to further bolster the glass. It has been used at locations including the International Conference Centre in Edinburgh and Pioneer Point in London.

“At Linden Gardens, the glass fits into an aluminium channel frame but that frame is recessed into the ceiling and floor, so is concealed. Where it abuts the walls there are intumescent strips.”

Inserting a new steel framework to support the reconfiguration of the rear of the build- ing at lower ground, ground and first floors, including the marginal repositioning of the existing light well, also had ramifications for the use of glass.

“The light well is encased by a Fineline Aluminium glass sliding door and glass screen system, which has good insulation qualities and which is also vital to bringing extra light into apart- ment one. But we also wanted to disguise the steel behind the glass system. We achieved that by using back-painted glass panels which hid both the floor structure and structural vertical posts.”

Coathup stresses that all the internal glazing at Linden Gardens is bespoke, and the detail design was carefully and painstakingly developed between Fruition Properties, Hub Architects and the fabricator, Fineline Aluminium.

The external facades, including window apertures, may have survived but all the sliding sash windows have been replaced with modern, timber-framed and double- glazed versions.

Making the light well larger, introducing more glazing and relocating it slightly closer to the back wall of the building all helps bring in extra light. Elsewhere, a mechanical sliding roof light that sits above the central staircase from third to fourth floor has the same effect.

Overcoming and learning from the challenges

Fitting an appropriate lift system in this Victorian conversion was another of the project’s challenges. Creighton says:

“For access requirements it is beneficial to have level access…but we needed something that would meet the aesthetic targets of the conversion. We’ve now put in a lift with glass doors to follow the theme of transparency.”

Inserting new floors, says Coathup, was also a challenge. An easi-joist system spans steel beams, party and blockwork walls. Plywood decking was then laid over joists with acoustic, insulation and underfloor heating layers on top of that. Coathup explains:

“It was a question of careful, sequential manoeuvres with quite a lot of temporary works.”

“The new floors were inserted at slightly different levels to maximise floor-to-ceiling heights. That had to be considered very carefully in relation to the facade’s existing windows.”

Coathup says lessons have been learned at Linden Gardens that will stand everyone in good stead for future work:

“Beside the fire-rated glass work, we’ve learned how carefully you have to check drawings against glazing system installation to make sure everything fits together – coordination is the key and a 3D model of the structural elements certainly helped understanding where steel components were going to be and what we had to conceal.”

One of the most striking features of the townhouse conversion is a living wall within the light well, which spans the lower ground and ground levels and is around 5 metres wide. This can be enjoyed by people sitting in the space at the bottom of the light well. Coathup says:

“It creates its own micro eco-system and improves the air quality around that area. It looks pretty good too!”

Creighton points to another ‘green’ aspect of the conversion: “By bringing in more natural light to the lower parts of the building we don’t have to use so much artificial lighting during the day.”

“Effectively taking this Victorian townhouse to pieces and putting it back together again results in having to improve the insulation as well as the overall standards of construction. That includes the acoustic insulation between apartments. It brings a tired building up to current regulations.”

As Creighton says, conversions like the one at Linden Gardens are a

“good way to bring these buildings into the 21st century and give them a longer lease of life.”

Contemporised Victorian: a style in demand

Conversions like this at 27 Linden Gardens are uncommon but, as Coathup says, “contemporised Victorian buildings are in demand.”

The clever use of glazing to create the transparency of apartments one and four contributes to asking prices of £3.5m and £2.5m respectively.

Apartment two, accommodated by a first floor mezzanine, and apartment three on the second floor have traditional partition walls. However, the quality of this luxury project suggests it won’t be long before all four apartments are snapped up. 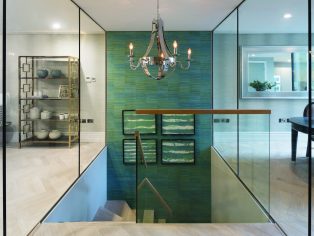 All the internal glazing at Linden Gardens is bespoke, and the detail design was painstakingly developed by Fruition Properties, Hub Architects and fabricator Fineline Aluminium ©Richard Gooding

Inserting a new steel framework to support the reconfiguration of the rear of the building at lower ground, ground and first floors, had ramifications for the use of glass ©Richard Gooding 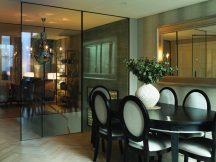 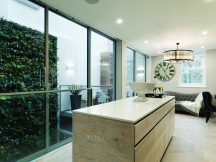