The annual Galvanizing Construction awards, better known as the GAGAs, were held at the Royal Aeronautical Society in London on 29 June, with 100 industry professionals from across the UK and Ireland in attendance.

“The entrants proved that a simple and robust technique – which is over 200 years old – can still be harnessed to produce visionary architecture and engineering that integrates innovative design with the benefits of sustainability.”

Among the winners was the Greenwich Low Carbon Energy Centre by CF Møller Architects, which received the Galvanizing in Architecture Award. The centre is the largest new build residential heat network in Europe and forms part of a major urban development initiative on the Greenwich Peninsula. It will save over 20,000 tonnes of carbon every year.

“Cultural value was added to the accompanying visitor centre by the reimagining of a standard flue stack as a galvanized work of art.”

Snug Architects took home the Galvanizing in Detail Award for their Milford-on-Sea beach huts design. The best use of a Duplex coating was awarded to Ian Ritchie Architects for the Sainsbury Wellcome Centre at University College London, where galvanizing and painting were used to provide visual consistency and a durable and robust fire protective system plus a 60-year lifespan.

The Galvanizing in Engineering Award went to the £14.2m rebuild of Hastings Pier, which saw the replacement of 90 per cent of the historic structure. Galvanized trusses, cross beams and ties were all used in an “ambitious” reconstruction of the pier, which had been neglected for decades before being severely damaged by fire in 2010. The galvanizing is particularly suited to the coastal environment and has secured the pier against future degradation.

Another notable winner was Global Rail Construction, who took home the Sustainability Award for its developments in steel signal structures. The design demonstrates significant cost efficiencies and promises new strategies for reuse and recycling of galvanized steel structures.

“Judging was exceptionally difficult this year due to the calibre of entrants and it is unfortunate that some excellent projects did not cross the winning line. Our winners reinforce the fact that galvanizing is all around us and plays an important role within our built environment.” 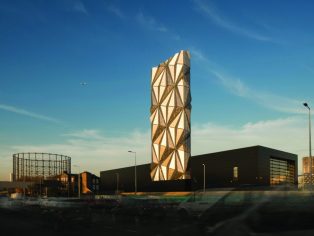