International design and innovation office Carlo Ratti Associati has unveiled the design of a master plan for the Currie Park waterfront of West Palm Beach, Florida, featuring a one-of-a-kind floating plaza that utilises some of the same technologies employed in the construction of underwater vessels.

The project will transform a 19-hectare vacant area on the coast of Lake Worth Lagoon, the narrow sea channel that separates the two cities of West Palm Beach and Palm Beach, creating a major new complex that includes housing, retail, and leisure facilities.

A pair of leafy ramblas will allow people to stroll from the city center of West Palm Beach directly into the middle of the lagoon. Here, Carlo Ratti Associati will build a floating plaza that sits on the water, partly under the sea level, thanks to a system of responsive air chambers similar to the ones used by submarines. The floating peninsula will incorporate a series of public facilities, including an organic restaurant with its own hydroponic cultivations, a circular pool, an auditorium, and a water plaza.

“With this project, we aim to reclaim West Palm Beach’s connection to the natural elements that surround it, and give shape to a vibrant new district that will serve as a creative catalyst for the entire city”, said Carlo Ratti, director of the Senseable City Lab at the Massachusetts Institute of Technology and founding partner of Carlo Ratti Associati. “The project also showcases how a new technology allows us to radically redefine the relationship between architecture and water.”

The floating plaza, sitting on the safe waters of Lake Worth lagoon, will be built upon a series of air chambers that automatically open and close, releasing or taking in water according to the number of people that are walking on the surface.

“Architecture usually conceives of buildings as separate, autonomous entities, but in this case, the plaza inhabits the water as if it was carved right into it”, adds Ratti: “The water becomes a moving element that harmoniously accommodates the new public space”.

Back on the mainland, the master plan will coalesce around a newly expanded Currie park, which will extend out across the city from its current waterfront location via a pair of leafy ramblas. The project will anchor a new, lively part of the city, featuring residential towers, a pool terrace overlooking the sea, and a retail area that will include a food hall dedicated to organic products. The master plan will also reshape the waterfront’s overall terrain. On the north side of Currie park, where a parking lot stands now, a gently sloping hill will be created, allowing pedestrians to access the area and opening up the view towards Palm Beach’s narrow stretch of land and the ocean just beyond it.

“The Currie park master plan will bring new life to West Palm Beach and serve as a world-class attraction that draws tourists to our city”, says project investor Jeff Greene. “This also builds on the success of our collaboration with Carlo Ratti Associati on West Palm Beach’s new Greene School.”
“For too long, this part of West Palm Beach had its back to the water. Finally our city is about to enjoy a fantastic new public space for all of our citizens – one that will reconnect West Palm Beach with Palm Beach and open up the city to its surrounding natural elements”, says Jon Ward, Executive Director of the City of West Palm Beach’s Community Redevelopment Agency.

The project of the Currie Park master plan draws on Carlo Ratti Associati’s long-time research on innovative uses of water in architecture. In 2008, the office designed the Digital Water Pavilion at the Expo Zaragoza, a building with retractable walls made of water that gained international recognition and was named by TIME magazine as one of its “Best Inventions of the year”. The master plan for West Palm Beach was unveiled on 31 October, 2016. Construction will break ground next month and will be completed by 2018, allowing people to seamlessly live in their city – on the ground and over the water. 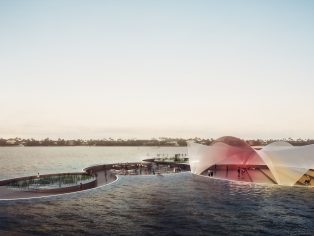