The planning application proposes to redevelop Craigpark Quarry near Ratho, Edinburgh into a word-class surf and leisure facility offering a variety of water sports on its man-made loch.

The 23 hectare wave park has been masterplanned and designed by landscape architects HarrisonStevens, with engineering and technical consultation provided by WSP, and planning and development advice by Colliers International.

In an unprecedented scenario for a major application, zero objections were raised.

“We’re cautiously optimistic that our years of research, consultation and planning will pay off. We believe our facility will enhance Ratho as an international destination for adventure sports, and we’re delighted that we have the chance to deliver the project in a brownfield site within an old quarry.”

Wavegarden Scotland will be an ecologically responsible and diverse space for the surrounding communities and visiting public, with a large country park for walkers, runners and cyclists to enjoy. The proposal details how the former quarry site has guided the design, with extensive re-use of onsite materials and stone to capitalise on the natural character of the site, while carefully considered plant and landscaping choices will help restore the area’s original ecology which was lost during the former quarry’s operations.

The overall design will develop existing integrated transportation and leisure links, including with the nearby canal network, into the heart of Edinburgh as well as the wider central belt.

With surfing due to debut as an Olympic Sport at Tokyo 2020, the team envisions that Wavegarden Scotland will be delivered in time for the event and will encourage future generations of Scottish surfers to dream big as they perfect their skills on some of the most advanced surfing facilities available.

Using recently released, state-of-the-art wave generation technology called The Cove, Wavegarden Scotland will be among the most advanced surfing and water sport facilities in the world, with the capability to enable elite-level sports training and development.

“We are hopeful we’ll be able to open the doors to these world-class waves in the near future. The high-performance offering of our facility will cater for a number of different sports and we hope that Wavegarden Scotland will help future generations of water sportsmen and women take their skills to the next level.”

“Scottish surfing is growing and becoming more and more competitive on the world stage. Scottish Women’s Champion, Megan Mackay, took the Women’s gold medal at the Nordic Surf Games earlier this year, and we have proven we can make heats on the world stage in previous World and European Championships and at this year’s ISA World Games in Biarritz. Now we are hoping to raise enough funds to send a team to the European Surfing Championships in Norway in September.

“A facility like Wavegarden Scotland would give the Scottish surfing team a huge edge as a training facility, thereby helping us cost-effectively prepare for different conditions in competitions.  It would also be very important in encouraging and developing future talent, while showcasing this wonderful sport to a wider audience.”

“The consultations received a very positive reception from those that attended and viewed the information online. Wavegarden Scotland will provide a huge economic boost to the area.” 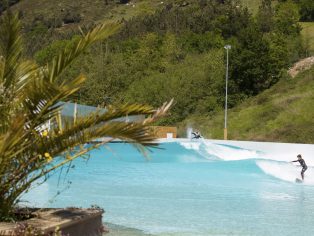 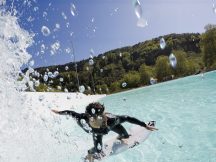