Planning permission and listed building consent applications for a new council office building in Dumbarton have been submitted by Keppie, on behalf of West Dunbartonshire Council, 150 years after the foundations of William Lieper’s original Academy Building were laid.

The project is being delivered by hub West Scotland in partnership with West Dunbartonshire Council, with architects Keppie and main contractor Lend Lease.

It has recently achieved ‘Stage One’ approval from the Council, and is now progressing into detailed design. The 5,455 sqm building will provide new, BCO compliant offices, meeting spaces and civic facilities in the heart of Dumbarton. The scheme will retain, repair and restore the Grade-A Listed facade to form a new administrative centre for West Dunbartonshire Council and the local community, helping the regeneration of the town centre.

The curtilage of the existing facade forms the main entrance and new ‘one-stop shop’ while also housing a new civic space and training rooms on the upper floor. Designed to achieve a BREEAM excellent rating, project incorporates a central atrium space creating a link between ‘old and new’ and providing a social heart to the workplace which supports the naturally ventilated, open plan office space. An enhanced public realm space on Church Street will create the setting for the restored façade with a new, terraced, landscaped amenity space formed off Castle Street.

The rational brick envelope of the extension is designed to both complement and respect the blonde sandstone of the Academy building. The design will also provide a number of expansive views to Dumbarton Rock which will help to encourage investment in town centre businesses.

“I am delighted that the plans for the new Council offices in Dumbarton are continuing to move forward. As well as renovating one of the most iconic buildings in the town centre, the move will help to revitalise the High Street by bringing increased footfall to the shops.”

“It has been a privilege to be involved in a project that has the opportunity to retain William Lieper’s Academy façade and integrate it into a significant new project in the regeneration of the town centre. Our aim has been to respect the architectural significance of the original building, to repair its façade and to see it become part of a modern, flexible workplace. We want to preserve its civic nature by housing the community operations within its envelope, keeping the new office floor plates efficient, flexible and well lit, to the rear of the site.” 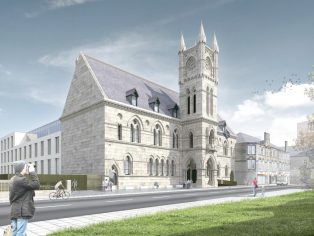