West Wales haulage, civil engineering and aggregates contractor GD Harries is celebrating the completion of one of its most unusual projects yet: the creation of a new velodrome in Carmarthen.

The £500k structure is believed to be the first and only concrete velodrome in the UK. It posed some interesting challenges for the contractor, who had to find a way to pour concrete onto a sloped surface without gravity redistributing it before it set.

“The shape of a velodrome has no horizontal or flat areas; event the straits are slightly inclined, so laying concrete is quite challenging,” said senior quantity surveyor Richard Burton. “We had to come up with method of getting it accurate, and making sure the concrete stayed where it was supposed to. We achieved it by pouring the concrete into a series of bays, continually moving from the bottom to the top of each bay as we poured.”

The velodrome, which was funded by Carmarthen Town Council, Carmarthenshire County Council, Sports Wales and Welsh Cycling, opened at the end of October. It is used by the public and by local cycle team Towy Riders.

The construction required 570m³ of concrete, which GD Harries supplied, and it is expected to last 50 years. It replaces the original velodrome, which was built in the early 20th century.

An added benefit of the new velodrome is that its concrete surface enables cyclists to travel at higher speeds than on velodromes made from other materials.

“We were delighted to take this on as it’s such an unusual project,” said Richard. “We enjoyed the challenge of finding the best method to use, and we’re very pleased with the finished result.”

“The redevelopment of this facility, first used over 100 years ago, has been a challenging but really interesting project and my thanks go to all who have worked so hard to make this happen,” he said

“It would not have been possible without the financial support of Carmarthen Town Council, Carmarthenshire County Council and Sport Wales. Also the people on the project team, including Carl Morgan the project manager, Alun Harries the Clerk of the Town Council and of course the contractors GD Harries who have done such a fine job. We now look forward to the next chapter in the story of Carmarthen velodrome.” 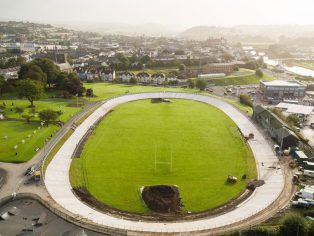