The Wienerberger Brick Award has offered a unique platform for the recognition of outstanding brick architecture of international quality since 2004. The use of Wienerberger products is no decisive factor for participation. The award comprises of different categories, which may change depending on trends and current topics.

In 2016, prizes were awarded in the following categories: Residential Use, Public Use, Re-Use, Urban Infill, and Special Solution. The award is endowed with a total of € 31,500 in prize money in five categories. In total, more than 600 projects from 55 countries had been submitted, a new record participation. Owing to the great variety of projects, it was not an easy task for the independent pre-jury panel to narrow down the submissions to 50 nominations. From this shortlist a jury of four internationally renowned architects selected the winners.

This year, two projects were awarded the Grand Prize. One of these prizes went to theoffice building 2226 by architect Dietmar Eberle, which is located in Lustenau. He perfectly implemented his credo of ‘Back to the roots!’, with the main characteristic of his project lying in its energy concept. The entire building manages without ventilation, without air conditioning, without heating. The name already indicates the prevailing indoor temperature, which ranges between 22 to 26 degrees Celsius all year round. This is made possible by 76-cm thick brick walls. The only energy source is heat emitted by people, computers and luminaires. This revolutionary approach also impressed in the Special Solution category.

The second Grand Prize winner, House 1014 in the historic city centre of Granollers (Barcelona), is an excellent example of how to use “left-over” space in urban areas. The very long and narrow site with a width of only 6.5 metres shows extreme site conditions. Starting from the client’s wish to divide the home into two independent zones, Spanish architectural office HARQUITECTS created a sequence of alternating interior and exterior spaces. These comprise of a private home, a guest house as well as terraces and atria. The use of bricks conveys both tradition and modernism, and substantially contributes to the overall appearance of the property. In addition to the Grand Prize, this project also came out as winner in the Urban Infill category.

Termites served as inspiration for the project from Vietnam, which won in the Residential Use category. The name Termitary House describes the layout of the building, which resembles the building plan of a termite mount, where all corridors, galleries and rooms come together in a central main room. To brave the extreme climatic conditions of the tropical monsoon climate, the architects from Tropical Space decided to build the house entirely of brick.

The auditorium of the AZ Groeninge health centre in Belgium is the winner in the Public Use category. While the main building is characterised by a traditional design, a contrasting structural shell was conceived for the new auditorium. It seems to sink into the sloping ground, with one side protruding over the edge. Rough bricks envelop the curved façade. “The bricks were placed vertically to emphasise the ribbon-like curvature of the building,” explains architect Bert Dehullu.

In winner in the Re-Use category is the Marília project by Studio SuperLimão in São Paulo, Brazil. The house on Rua Marília dating from 1915 is one of the last historic brick buildings in the area. Instead of opting for the economically attractive alternative of demolishing the building, it was agreed to preserve it. “With Marília we had the opportunity to create a project respecting the history, the building material, the environment, and the surroundings”, emphasises the architect.

A Special Prize went to the architect duo Duplex from Switzerland for their project Cluster House in Zurich. As part of this novel housing concept, the residents forgo having certain conveniences such as their own garage space, but in return they are rewarded with various services, including car sharing, communal kitchens, greenhouses, and hotel rooms for guests.

“I am impressed with the quality and internationality of this year’s submissions. They illustrate how customized architecture concepts can bring about unique and forward-looking projects – even under extreme climatic or spatial conditions. The innovative winning projects thus emphasize the varied application possibilities of brick as a building material,” comments Heimo Scheuch, CEO Wienerberger AG. 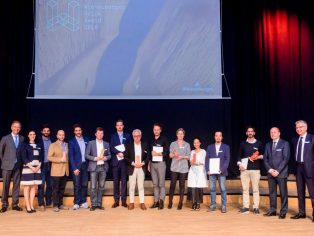