Will SuDS legislation be put into place?

With the government now planning to hold a consultation to discuss where to go with SuDS, Andrew Gill, marketing manager of Brett Landscaping, wonders if and when any actual legislation will finally be put into place

To admit to feeling frustrated at the lack of progress regarding any ‘official’ implementation of Sustainable Drainage Systems (SuDS) legislation is something of an understatement. This follows the September announcement by the government of a new consultation, aimed at discussing the future of SuDS, which, at face value, sounded very pro-active.

In reality, this consultation actually sounded the death knell of the 2010 Flood and Water Management Act and should be seen as nothing more than the latest in a series of governmental U-turns and delays. These have, over recent years, significantly hampered architects and specifiers in addressing the important issue of sustainable drainage with any degree of certainty.

Why say this? Well, let’s consider the timeline starting in 2007 when the Pitt Review was published. This presented the case for change advocating the enforcement of SuDS following the extensive flooding of 2007. Yet despite its production and publication, nothing was ever finalised. Then, in 2010, further guidance on the implementation of SuDS was presented, this time via the Flood and Water Management Act. Yet again, nothing was enforced by the government as the National Standards required to enable the legislation were never produced – despite frequent flooding events to act as reminders over the intervening years.

Even this year, in a recently released progress report, the Committee on Climate Change (CCC) highlighted concerns surrounding the lack of SuDS in the UK. Yet disappointingly, the actions required to address the CCC’s findings have far from been enforced. In fact, the publication of an implementation directive, originally scheduled to take place in September, has now actually been shelved, owing to concerns that housebuilding activity is on the decline.

So what’s going on? Why all this delay? It’s indisputable that, in this country, we have flooding issues. When rain falls, our ageing infrastructure and increasingly developed landscape just can’t absorb the overflow. While it appears the government is fully aware of this, its behaviour is too tentative in doing something solid about it. Is this because, despite advice and concerns shared by authoritative bodies who’ve researched the issue, the government is unsure of what to do? It looks as though the buck is being passed to local authority planning departments – asking them to consider SuDS when assessing development applications – but without providing any clear guidelines as to what is required.

It could therefore be understood why confidence is somewhat lacking when it comes to the announced consultation on SuDS, for fear that it will be nothing more than another costly exercise which will result in little, if any, further progress.

Meanwhile the ever-increasing pressure placed on our infrastructure and environment continues. Sadly, ongoing flood events resulting from climate change don’t afford us the luxury of being able to hang around indefinitely while the government tries to make its mind up.

In crude terms the statistics show that in a greenfield site 95 per cent of water is absorbed into the ground; this falls to only 5 per cent absorption within an urban development. Every year, an area the size of 200 football pitches is lost to impermeable paving in London alone, and it’s not rivers breaking their banks that cause the majority of this county’s flooding, but infrastructure being overwhelmed and unable to deal with the excess water run-off.

If we couple these statistics with government targets for new homebuilding of up to 300,000 units per year by 2020 – each of which will take up an average of 250 sq m of land – how will the urban environment cope without official SuDS guidelines and heavy rainfall events becoming more frequent?

Architects, landscape designers, master planners and the more proactive local authorities, should move forwards regardless in their implementation of ‘best practice’ and make a difference country-wide by incorporating SuDS-friendly features as standard.

Brave as it may sound, there’s often very little physical alteration that needs to be made. Materials such as permeable paving can make all the difference in meeting SuDS requirements, yet still present scope for the resulting hard-landscaping solutions to be aesthetically pleasing and an asset to developments.

This ‘designed in’ option replicates the run-off characteristics of a greenfield site and, interestingly, improves the quality of water run-off for surrounding biodiversity by trapping up to 95 per cent of water-borne pollutants on-site.

Think what a difference SuDS could make to existing urban developments – not only new. After all, gravity ensures that what affects your new-build neighbour will inevitably flow down the hill towards where you live.

Effective implementation of SuDS can therefore benefit our highways, wildlife and the country’s infrastructure in general, saving money, damage and loss, together with untold longterm disruption.

So as we head into winter, still waiting for the government to get its checklist together, despite having watched the country suffer again from the effect of flooding in 2014, let’s hope those with the power to make a change through the design process do just that and improve future conditions for all of us. 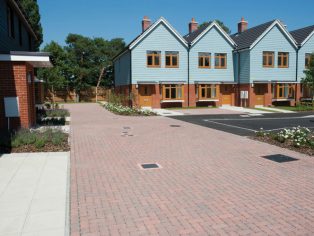