Revised plans for a community backed wind farm that could positively transform the local economy have been resubmitted following a careful redesign.

Hamilton based developer, Banks Renewables has taken on board comments and suggestions including feedback from East Ayrshire Council – and looked to improve the appearance of its proposed Lethans Community Wind Farm in the landscape, while maximising the clean, green energy produced.

Situated east of New Cumnock in East Ayrshire, the new plans include the removal of five turbines that were originally proposed to be located on a ridge, whilst the total number of turbines has also been reduced from 26 to 22.

In order to generate maximum clean energy, Banks Renewables is now proposing that five 176 metre turbines are located within the valley area which is better screened from view and the updated 74.8MW project will be capable of powering an estimated 40,600 homes.

“Our updated plans are really exciting.  We have had an invaluable opportunity to take on board comments received from the agencies consulted to bring forward a wind farm which will generate a significant amount of clean, renewable energy and ticks all of the boxes from a technical perspective. The new design and the lie of the land on the site means that the wind farm will fit into the local landscape.

“Perhaps most importantly though, is that by fostering strong relationships with the very supportive neighbouring communities over the past three years, we believe that our proposals will directly benefit the local area and deliver a real, lasting, positive impact.”

As part of an ongoing period of consultation in 2015, Banks Renewables received 420 letters of support from the public, with just one letter of objection.

“If the development is approved, not only will it create sustainable energy but it will also open up funding that will be directed into local causes and employment opportunities which will help with the overall regeneration of the area.

“We’d like to thank everyone who has contributed to the planning process over the past couple of years and hope that it will lead to a positive decision from the Scottish Government.”

The plans for Lethans Community Wind Farm, were submitted to the Scottish Government’s Energy Consents and Deployment Unit and East Ayrshire Council on 26 July and the proposed site is over 2km away from the nearest homes.

The Hamilton based employer has been praised for its partnership approach to the proposals by working with members of the local community at each stage of the planning process.

This has meant that if approved, the electricity generated from the wind farm will provide funding to deliver tailored benefits to directly fit the needs of the communities including helping to support their recently launched action plans.

The site promises to create a welcome financial boost to the local economy which has suffered in recent years due to the closure of its coal mines.

Construction costs are valued at an estimated £70 million with a potential £17 million to form local contracts, including a variety of local services, from aggregate supply to catering facilities.

The Lethans Wind Farm would contribute approximately £8 million over the 25 year lifetime of the project towards community initiatives, in addition to a £250,000 investment towards improving access to the site with cycling and walking facilities.

The firm is also offering the community the opportunity to purchase up to a 5% stake in Lethans Wind Farm.  Having an annual revenue stream over the 25 years lifetime of the wind farm presents an opportunity for long lasting, positive benefits for the local area.

Banks Renewables is part of the Banks Group (www.banksgroup.co.uk), a family firm founded in 1976, which now employs over 420 people in the renewable energy, property and mining sectors.

To support this important project that will bring investment, jobs and clean, green energy to East Ayrshire, please go to:http://www.banksgroup.co.uk/lethans/support-this-project/ It only takes a few moments! 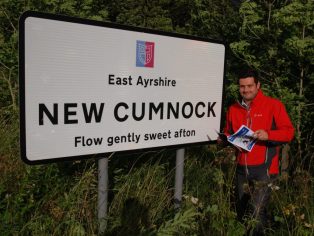