The 2018 RIBA Norman Foster Travelling Scholarship has been awarded to Steven Hutt of University of Greenwich for his proposal, ‘East of Eden’.

Steven will investigate how urban wildlife is adapting to the rapid rise of densely populated mega-cities in the far east of Asia. The study will take him to Taiwan, Hong Kong, China, South Korea and Japan, where he will visit the largest and fastest growing cities in the world; to document how local technologies are cultivating new natural environments for urban wildlife to cohabit with humans.

During the debate, the jury also highly commended ‘The Worlds Waste: What Happens Once Waste’s in the Bin’ by Jemma Chapman of Ravensbourne and ‘Sensecity’ by Kitty Byrne of the Mackintosh School of Architecture, Glasgow School of Art. Jemma and Kitty will receive a camera as a prize for their proposals.

“This year saw the highest number of entries to the Travelling Scholarship, and as ever the standard was extremely high, which gave the jury an extremely challenging task. In the end, we all felt the winning proposal dealt with a topic that was extremely relevant given the accelerating pace of urbanisation in Asia and the rest of the world. The relationship between nature and the city will be a key aspect, as we seek to develop the sustainable cities of the future, and I look forward to seeing the findings of Steven Hutt’s research that he will carry out during his journey through China, South Korea and Japan.”

“I am delighted that the 2018 RIBA Norman Foster Travelling Scholarship has been awarded to Steven Hutt from the University of Greenwich. I admire Steven’s proposal to visit some of the fastest growing cities in the world to explore how urban wildlife cohabits with humans. I wish him well on his travels and very much look forward to his research findings.”

Initially set up in 2006 as a biennial programme, the £7,000 RIBA Norman Foster Travelling Scholarship is supported by the Norman Foster Foundation, Foster + Partners and the RIBA. The prize is awarded to one student to fund international research on a topic and in a location of their choice. In 2009, Foster + Partners enabled the Scholarship to be awarded annually by donating an extra £100,000 to the endowment. 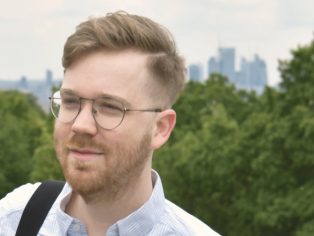