An expert jury unanimously selected the best architectural design project for the future Babyn Yar Holocaust Memorial Centre, to be built on the site of the 1941-1943 atrocity in Kyiv, Ukraine. The winning design was submitted by the Austrian architecture bureau – Querkraft Architekten – with the landscape architect Kieran Fraser Landscape Design (Austria). This ground-breaking centre will be the first Holocaust Memorial in Eastern Europe.

The competition’s goal was to come up with a world-leading design solution that would allow for the creation of a next-generation memorial. The future Holocaust Memorial Centre will become a place of memory, a museum and a platform for research, public dialog and reflection on the tragedy, all combined in one. It will comprise exhibition spaces for core and visiting exhibits, an education and a research centre, a space for public events, and premises for an archive and the museum collection documenting the Holocaust in Ukraine and beyond. The project will complement the distinctive Babyn Yar landscape and the memorial park with an outstanding design and a unique visiting experience.

The concept of the winning project is built around the future centre visitor’s individual perception of the Holocaust. The design solution enables the visitor to physically feel the danger and hopelessness that surrounded the Holocaust victims gunned down at Babyn Yar. A long ramp resembling a ditch or fissure leads to the core exhibition located 20 meters below the ground level. The walls of the ramp rise up around the visitor, ultimately encasing them underground. The journey made by visitors mirrors the path taken by Babyn Yar victims towards their place of their death in the Babyn Yar ravine, whilst also reflecting society’s incessant plunge towards the darkness of violence.

After traveling through the core exhibition, the visitor emerges into a luminous atrium. This space is the Memorial Centre’s “heart”, symbolising the future, which gives hope. Surrounding the atrium are multiple teaching rooms, designed for public talks and dialogue, academic research and larger event spaces. The entire design is built around the idea of contrast between dark and light, despair and hope.

Initially, 165 applications were submitted from 36 countries. Renowned design companies were among the applicants, such as Eisenman Architects, Diller Scofidio + Renfro (US), Zaha Hadid Architects (UK). For example, Eisenman Architects designed the Memorial to the Murdered Jews in Berlin. 10 bureaus were selected in the pre-qualification procedure.

The architectural competition to find the eventual design for the Babyn Yar Holocaust Memorial Centre was launched on 19 December 2018. It was organised by German firm phase eins., which had previously run competitions to find designers for the Heaven’s Hundred Memorial and the Museum of the Revolution of Dignity, both in Ukraine.

The Babyn Yar Holocaust Memorial Centre’s competition was held in two phases. This was based on UNESCO standards for architectural competitions and the rules of the International Union of Architects. The jury evaluated the project under the condition of anonymity and along specified criteria.

The general jurors were:

The Babyn Yar Holocaust Memorial Centre (BYHMC) is a non-profit educational organisation aiming at due commemoration of the Babyn Yar tragedy victims through building an innovative memorial centre in Kyiv and promoting the humanising of mankind through the preservation and exploration of the memory of the Holocaust. The future Centre will be located next to the site of the tragic events in the ravine of Babyn Yar in 1941-1943. Its purpose is to remind that in two years of occupation of Kyiv, the Nazis executed here 70,000 to 10, 000 people; 33,771 Jews were murdered in Babyn Yar on September 29-30, 1941 alone. This is one of the most massive massacres of World War 2. 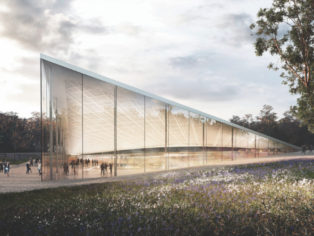