A Development Consent Order application has been submitted to the Planning Inspectorate (PINs) for the world’s first purpose built tidal lagoon in Swansea Bay.

As a project of national significance, the application, which has been developed through extensive consultation in Swansea Bay, will now be reviewed by the Planning Inspectorate before the public examination process commences, and then determination by the Secretary of State for Energy & Climate Change.

Swansea Bay Tidal Lagoon will create a new waterfront for Swansea, a focus for water-based activities and a visitor destination in its own right. The masterplan, design coordination and public realm design for the project, by London 2012 Olympic Park designer LDA Design, creates a ‘Maritime Park’ between Swansea Bay’s beach to the west and Crymlyn Burrows natural dune system to the east.

LDA Design’s masterplanning of the renewable energy lagoon includes sea and landside areas. On the seaward side, the work includes the establishment of new lagoon walls which will capture an area of water that will form the focus for a dynamic public realm, including new beaches, water sports, art and mariculture.

The scheme includes an iconic 3,500 sq m visitor, operations and maintenance building, designed by Juice Architects. Sited at the end of the Lagoon’s seawall, with access for visitors by foot, cycle and electric bus, it is made up of a series of overlapping shells sculpted to form a bowl like structure with an outer wall providing shelter from wind and waves. It is finished in highly textured concrete with tall window-like fissures between the shells offering views around the Bay.

The building will provide a leisure, cultural and educational base and is sited adjacent to the turbine house to enable access to the turbines as part of the visitor’s experience. It will also be self-sufficient with all energy required being captured from renewable sources or transferred through recycling waste energy as a by-product of the turbines, including solar panels on the roof.

Another important component of the Lagoon masterplan, is the 4,000 sq m international watersport and hatchery centre, designed by Faulkner Browns.

Inspired by traditional fishing warehouses and boat houses, the watersport and hatchery centre has been designed to complement local industry and heritage. It will provide an ‘outdoors’ focussed centre of excellence for both recreational and competitive sporting facilities alongside sustainably focussed research and development of various marine industries. It will include operational and maintenance facilities, boat storage and wet changing areas, a gateway facility, bio-reactor greenhouse facility and a hatchery.

The dedicated hatchery will house a fully serviced aquaculture system that can support the development and hatchery of oysters and lobsters through an applied seawater circulation system of tanks and hives. The oyster hatchery spawning process will be enhanced by a glass envelope system to generate greenhouse conditions for optimised algae growth with a bio fence network for algae cultivation. The greenhouse structure is designed to harness solar power, generating clean, low-energy nutrient supply to the adjacent hatchery.

Mark Shorrock, CEO of Tidal Lagoon Swansea Bay, said that the submission of the application marks a turning point in the development of the UK’s tidal resource.

“This naturally powered zero carbon scheme is enhanced by these destination buildings, that form a key part of the masterplan. The lagoon will provide a source of clean, renewable energy for the future and the entire maritime park will make a valuable contribution to the public realm of Swansea Bay and its waterfront.”

If given the go-ahead, construction of the Swansea Bay lagoon will begin in the first half of 2015, with first power being generated in 2018. 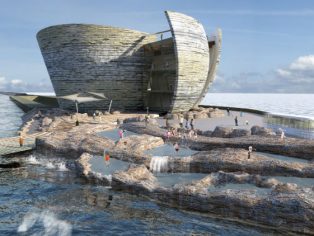