Zumtobel special luminaires for unique stadium façade More than eight years after the official opening of the stadium, the WWK Arena in Augsburg finally gets a new and impressive façade. For this purpose, Zumtobel has developed “light tubes”, a special luminaire that is integrated into the unique façade structure, making it an architectural highlight.

The design for the new Augsburg Stadium by architects Bernhard & Kögl in Augsburg involved a spectacular exterior façade and now, eight years after commissioning, this vision has been turned into reality. The new, modern and climate-neutral stadium, which was opened in September 2009, is the home ground of FC Augsburg and is also used as a venue for matches of the men and women’s national football teams. With the start of the 2015/16 season, the WWK Insurance Group became the main sponsor of FC Augsburg and since then, has lent its name to the 30,600 seat “WWK Arena”. With its commitment to Augsburg, the insurance group decided to finance the previously uncompleted façade, thereby turning the stadium into a special highlight. The aluminium structure is wrapped around the stadium like a nest in three levels. In an irregular, Mikado stick-like arrangement, the LED fluorescent tubes are woven into the aluminium tube construction. Zumtobel took up the idea and vision of architects Bernhard & Kögl of a homogeneously luminous, oversized tube of light throughout the project and turned it into reality with the construction of the “light tubes”.

In the competition design for the new Augsburg stadium, the original plan for the façade was a Profilit glass shell in the club colours green, red and white. Subsequently, a more favourable façade design by the stadium architects Titus Bernhard and Peter Kögl with aluminium round profiles and LED tubes was presented, but not commissioned. It was only when WWK, FC Augsburg’s new main 10-year sponsor since the 2015/16 season, came on board, that the architectural façade of the stadium could be completed in September 2017. Client, sponsor and owner of the façade, WWK, once again commissioned the Augsburg architects Titus Bernhard and Peter Kögl to implement the project. They received the contract to check and adapt their façade design with aluminium round profiles and LED tubes for technical developments. The project team “Atelier of Light”, which implements architectural projects with special solutions at Zumtobel, had already been in direct contact with Titus Bernhard through previous joint projects. Thus, Zumtobel developed the entire design concept for the light façade based on state-of-the-art LED technology in close cooperation with the architects.

“It was only because of the expertise of the ‘Atelier of Light’ in various areas of special construction, lighting design and visualisation, combined with a unique network of competent, external specialists and partners that we were able to implement the development and production of this unique and impressive lighting solution in line with the architect’s vision,” says Oliver Mosselman, Project Manager in the Complex Project Management Team of the Atelier of Light at Zumtobel.

The complex façade structure is made up of a combination of aluminium and fluorescent tubes, which are interwoven with each other and thus symbolise “enveloping the opponent”. Both elements are wrapped around three levels of the stadium like Mikado sticks. Depending on the distance between the tubes, a depth is created that seems more or less dense at places, depending on where they are.

Zumtobel has created special fluorescent tubes that have the same dimensions as the aluminium tubes and are part of the extravagant façade construction. These eight-metre-long so-called “light tubes” have a diameter of 20 centimetres and are equipped with IP67 RGB LED continuous rows. By integrating effect lighting into the façade, it can be illuminated in all possible colour variations and combinations, enabling a wide selection of colour variations to choose from. One special challenge in the construction of the special luminaire was the need for the tubes to be integrated into the façade as a structural load-bearing element and had to be approved by the building authorities.

The lighting concept is enhanced by 36 Contrast 2 LED L RGB spotlights from another Zumtobel Group brand, Thorn, which are mounted on existing lighting poles around the stadium. The compact and powerful LED spotlights support the light tubes in illuminating the impressive stadium façade and serve as basic lighting for the façade structure. The spotlights also cover the entire RGB colour spectrum, meaning they not only reinforce the adjusted colour scenes but also enhance the façade structure. This accentuates the three-dimensional character of the entire construction even more clearly. The light tubes and mast lights are controlled by livebau Solutions GmbH via a DMX server so each tube and each spotlight can be controlled separately. The result is an effective interaction between façade and column luminaires, which allows the colour and intensity of the individual luminaires to be adjusted.

Prior to implementation, the “Atelier of Light” team integrated the façade lighting concept into a three-dimensional stadium model with the aid of Zumtobel’s own “HILITE” tool. The concept visualisation created with HILITE facilitates a very realistic view and evaluation of the expected lighting effect. The lighting concept was presented to the clients and architects at Terminal V in Lauterach using a virtual reality application. For the first time, the simulation allowed the customer to experience the combination of aluminium tube façade, light tubes and basic lighting in a virtual and realistic way and to experience the effect of the lighting solution in its entirety. To enhance the virtual “tour” with a further convincing, real impression, WWK and the architects were then presented with a first, fully functional 1:1 sample of the “light tubes” at the Light Forum in Dornbirn.

“Upon the final completion of the new açade, the WWK Arena gains a huge upgrade and yet another architectural highlight. The WWK Arena in Augsburg is designed as a FIFA stadium for international (country) matches and is one of the few stadiums in Germany that attracts attention with its impressive façade and creates a special atmosphere for fans,” sums up Jürgen Schrameier, Chairman of the Board of WWK. 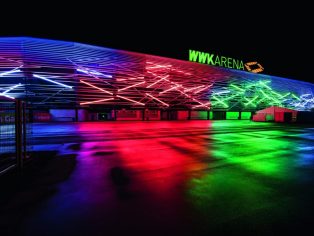