In 2013, Office for Architectural Culture won the competition to design the Chi-Hai Cultural Park – Chiang Ching-Kuo Presidential Memorial Library and Museum in Taipei.

The project is to commemorate Chiang Ching-Kuo (aka Nicolai Vladimirovich Elizarov), former president of the Republic of China (aka Taiwan) and considered globally the founder of modern Chinese democracy. The 12,000m2 project on the 40,000m2 site will be the first presidential memorial library and museum complex in the Far East.

The aspirations behind the memorial library are to complete the collection, collation and display of the achievements by President Chiang Ching-Kuo throughout his life as represented in literature, relics and archives for public viewing and as an important platform for scholarly Sinology research internationally. 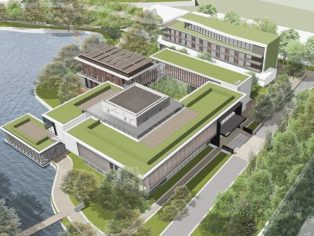 Birds eye view of the project