The new park at Drapers Field is linked via the KLA designed Temple Mill Lane to several Olympic Village projects – the Chobham Academy, The Academy and Community Playing Fields and four residential plots. These projects are of different scales and complexity. KLA have made strategic proposals for all these sites and the practice has used design to help bridge the gap between different projects either side of the Olympic boundary.

KLA were commissioned to revitalise three parks in Leyton, through Olympic Section 106 funds, including the Drapers Field, which was used during the 2012 Olympics as a service facility. The new park is currently under construction with completion due in spring 2014.

A main aim for the park was to create a place of sport and play on the walk to school at Chobham Academy which is located within the Olympic Village. The brief was to improve sports and play provision – the existing football facilities will be replaced with an upgraded synthetic sports pitch and new football pitch. In extension of the brief, our project aims to encourage more children and young people into sport through play. 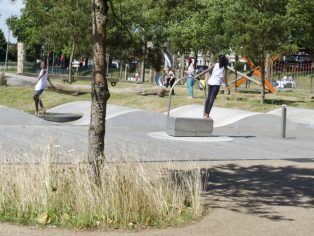