Wilhelmsburg’s former air raid bunker has been transformed into a symbol of the “Renewable Wilhelmsburg” Climate Protection Concept. Having languished almost unused since the end of World War II, the monument has now been renovated during the IBA Hamburg and converted into a power plant using renewable forms of energy, with a large heat reservoir. This supplies the Reiherstieg district with climate-friendly heat, while feeding renewable power into the Hamburg distribution grid.

At the heart of the project is the large heat reservoir built inside the former air raid bunker. In the years to come it will transform the building into an “Energy Bunker” capable of supplying a district covering an area of more than 1.2 square kilometres (120 hectares), thanks to the integration of different types of environmentally friendly heat and electric power units. The project’s most innovative feature is its large-scale buffer storage facility, with an expected total capacity of 2 million litres (2000 cubic metres). This is fed by the heat from a biomethane-fired combined heat and power unit, a wood combustion system, and a solar thermal unit, as well as the waste heat from an industrial plant. The buffering effect of the storage facility will result in a significant drop in the thermal generation performance, from 11 to 6.5 megawatts, enabling the economic use of renewable energy as part of the heat supply concept. 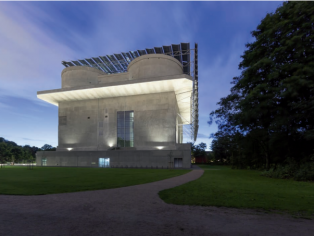