New equestrian centre for the Swedish Fortifications Agency. The project is the result of a competition won by Tengbom against four other firms of architects.

The new equestrian centre will primarily be used by the Swedish Armed Forces, the Police Cavalry and the Association of the Swedish Mounted Royal Lifeguards, but can also be used for shows and competitions. Since the new equestrian centre is built on a listed building site, it must blend in with its surroundings. The proposal was therefore thoroughly reviewed by a number of relevant authorities.Swedish Fortifications Agency

The indoor arena is a 105-metre long building which with its Falu red facade alludes to a modern barn. The building has symmetry as its signature with symmetrically positioned doors and roof lanterns. The interior is light and airy due to the slender truss structure with large areas of glass that let in plenty of light without dazzling the horses. The interior is stained birch plywood with seats for 750 spectators.

Tengbom has acted as both architects and general consultant for this assignment which means we have engaged all the consultants and were responsible for the entire design process.

The inauguration took place with due pomp and ceremony on 10 May in front of a packed audience. 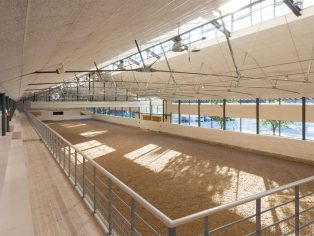