The regeneration of Kings Cross is a transformational city planning initiative at an incredible and ambitious scale. What is often described as the largest urban regeneration project in Europe, is a unique opportunity to make a new Quarter and European Gateway for London. Perhaps not since the construction of Kingsway and Aldwych at the turn of the 19th century and Broadgate in the 1980’s has such a large inner city site offered the potential to create and redefine civic identity and celebrate London’s destinational world status at the beginning of the 21st century.

This enormously complex £547m redevelopment project required a series of layered interventions involving three very different areas of architectural specialism: re-use, restoration and new build. The train-shed and range buildings have been adapted and re-used, the station’s previously obscured Grade I listed façade is being precisely restored, and a new, highly expressive and visually striking Western Concourse has been designed as the centrepiece and the ‘beating heart’ of the project. 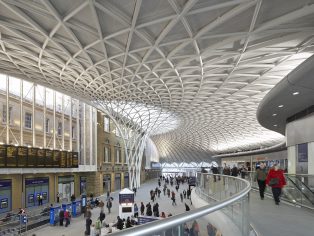