The project for the Qatar Integrated Railway Project (QIRP) comprises around 35 stations in phase 1 and around 60 stations in phase 2 for the new Doha Metro Network (planned to comprise 4 lines) and will serve as the backbone of the public transport system in the Greater Doha Area.

UNStudio’s design forms a bridge between the past and the future of Qatar, drawing inspiration from the vast regional architectural lexicon, whilst simultaneously representing an effective vision of modernisation and preservation. The design further aims to incorporate and integrate all functional and technical aspects of the network and stations into a coherent architectural expression.

A key concept within the design is one of creating varying scales of identity for the user – network identity, line identity and station identity. UNStudio developed an ‘Architectural Branding Manual’, a set of design guidelines, architectural details and material outlines that will assure the spatial quality and clarity of the network. The manual will be used by the appointed D&B contractors to implement and deliver the individual stations in the first phase.

Through a system of interconnected triangular base forms, the massing of the geometry adapts and transforms to incorporate programmatic functions and to connect interior spaces with exterior urban infrastructure. Using a large catalogue of architectural elements, the design represents a flexible new architectural system which can adapt itself to the scalar challenges set within the Metro Network.

The materialisation principles are experienced through a duality of a pure, modest exterior versus a rich, illuminated interior and employ a uniquely Qatari ornamentation and material palette.
Building a new network from scratch provides the opportunity to create a service which encourages the use of public transportation as a valid and clean alternative to private transportation. In UNStudio’s design spatial clarity and intuitive orientation are key components. 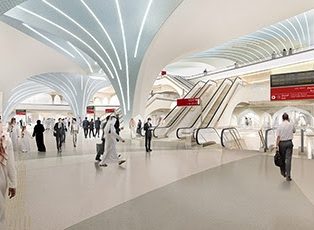