On September 23, the North Food Festival, a weeklong event dedicated to Nordic cuisine, will kick off in New York’s West Village and Scandic will be on site with its mobile hotel room, Scandic To Go. The room has been redecorated to provide a taste of what Scandic’s big new hotel at Stockholm’s Hötorget Square, Haymarket, will look like when it opens in spring 2016.

New York is a melting pot of trends and cuisine from around the world, and all things Nordic have been popular for some time, from food and drinks to style and décor. During the festival, Nordic specialties will be available at stands on “Scandic Haymarket Square.” There will also be a model of the new hotel that is being developed in the historic PUB department store building– just like the real building on Hötorget Square.

The hotel room is 18 m2 and has its own bathroom equipped with a shower and toilet. It also has two 90 cm beds, a pullout couch, specially designed storage spaces for clothing and other items as well as a large patio. All of the windows have blackout curtains and there is ceiling, floor and bedside lighting.

The room also offers amenities such as a TV, hairdryer, safe, air-conditioning, iron, ironing board, kettle, and free WiFi. It also has also a minibar that guests can fill themselves and exclusive toiletries from Face Stockholm – in other words, everything you need for a comfortable and relaxing hotel stay. 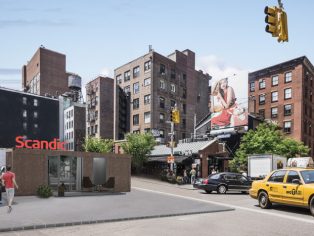