One of London’s most eagerly awaited hotels has recently opened – The Beaumont in Mayfair. The ReardonSmith designed hotel was developed by Grosvenor and is being operated by Corbin & King Hotels, the company founded by the legendary restaurateurs Jeremy King and Chris Corbin.

The project has involved the conversion of a Grade II listed Art Deco style building, originally designed as a garage and previously occupied by Avis Rent–A–Car, and was the culmination of a four-year search by Corbin & King Hotels and ReardonSmith for the right London site.

A sensitive extension to the existing north wing of the building, as well as two additional floors on the roof and two new basement levels, achieved space for a total of 73 guestrooms and suites, the colony Grill Room and American Bar, a separate residents’ bar & lounge, a small function room, a spa with hammam and a gymnasium. Works have included the entire removal of the interior structure behind the retained façade which was lifted and suspended while basement excavations were underway. All the fenestration is new with crittall-style windows to the lover levels of guestroom floors and simpler glazing above. The roof extension is clearly a modern intervention which does not attempt to copy the existing façade, yet is sympathetic to it. 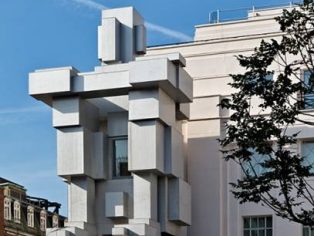