UCH2 is a partial new build and partial refurbishment of an existing building, and marks the southern end of the successful Priory Quarter district. This mixed-use development, much of which has already been built to designs by Proctor and Matthews, has successfully regenerated a large area between Hastings station and the town centre. At the heart of Priory Quarter is Priory Square – a new public space for Hastings, now enhanced further by the new UCH2 building.

UCH2 is dual-fronted, addressing one of Hasting’s main town centre streets to the south and Priory Quarter to the north. The southern portion re-uses a fine 1930s Post Office building, allowing its architecturally interesting façade to be retained. While the ground floor remains in use as a Post Office, the remainder has been refurbished internally and remodelled for education use by the University. The main architectural feature of UCH2, however, is a new build element on the site of the demolished rear portion of the Post Office. In place of a run-down and neglected building (a poor quality 1960s extension), UCH2’s new building provides a lively and contemporary presence opposite Proctor and Matthews’ other recent buildings on Priory Square. 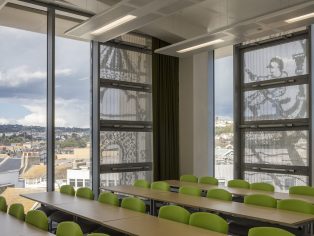