London Square has achieved planning permission to build the second phase of its landmark mixed use development in a prime location at Upper Richmond Road in Putney, SW15. The entire scheme will now comprise, over 47,000 sq ft of flexible retail and office space, a new public plaza and 113 apartments and penthouses.

The contemporary scheme has been designed by architects Allford Hall Monaghan Morris, to enliven and reinvigorate Upper Richmond Road. The façades will be predominantly brick-clad with ‘punched hole’ glazing, and the double height commercial space will feature striking deep window reveals, making the development a prominent feature on this bustling stretch of road between Putney Hill and East Putney underground station.

London Square purchased phase two, a 0.5 acre former office building at 111 Upper Richmond Road, close to both Putney railway station and East Putney underground station, from Carlton Plaza Limited on 2 May. This follows the original purchase of phase one at 113 Upper Richmond Road from Briargrove Limited and Investec Bank in June 2011, where construction work started in May 2013. Both phases are now expected to complete in 2016. 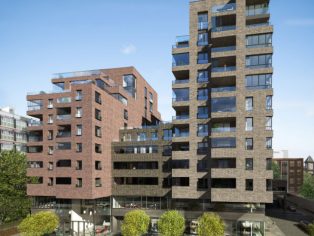