A-Hoy matey – is that secondary glazing we see?

The Historic Dockyard at Chatham in Kent, was one of the Royal Navy’s main facilities for four hundred years until it closed in 1984. Ownership was then transferred to the Chatham Historic Dockyard Trust to re purpose the site, opening it up as a visitor attraction, as well as including places where people can live and learn. The core of the 80 acre site, houses over 100 buildings and structures dating from the Georgian and Victorian periods, to present day new builds.

The Chatham Historic Dockyard Trust, SEEDA and the Local Council decided to develop the old Joiners Shop into a hub for creative businesses to be based.  Many of the building’s remarkable original features were preserved and incorporated into the new design. As part of the refurbishment, Kingswood Construction contacted Selectaglaze to provide a solution to augment the thermal insulation of the existing single glazed timber windows in the reception, office spaces and communal facilities; some of which had to be 30 minute fire rated. A total of 85 units were installed.

In spring 2018, Selectaglaze worked on the offices of the Chatham Historic Dockyard Trust, which is situated on the first floor of the Fitted Rigging House. 25 units were installed, again the Series 20 specified for the majority of openings. The large loop hole doors in the office that cannot be removed due to the buildings Listed status also required secondary glazing; so three Series 41 double side hung no threshold casement units were installed on door frames to improve thermal retention.

Established in 1966 and Royal Warrant Holder since 2004, Selectaglaze has a wealth of experience working on many building types, from new build to Grade I Listed buildings. 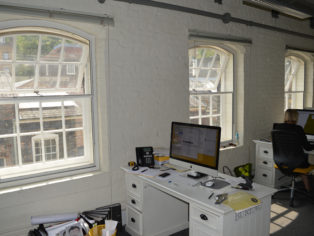