Abstract: Nowadays, the boundary between street art and vandalism is still very blurred. There are few tools to impede graffiti on public goods, but the coating sector offers a chance to prevent them through anti- graffiti paints. ADAPTA has entered the landscape of anti-graffiti coatings with a new high-performance powder product for the protection of the metal surfaces of public goods, such as street furniture, train and subway wagons, buses, façades, door and window frames, and the cladding of public and private buildings.

Based on the test carried out by various independent laboratories in Europe, the new ADAPTA Anti-Graffiti HCR has proved to be the best anti-graffiti powder coating currently on the market.
Graffiti was born in the late 1960s in New York. Its origins are tied to the concept of metropolis and the discomfort that large cities instil. Indeed, many anonymous artists chose large spaces left empty by urban decay or abandoned structures to express their idea of ​​plasticity and decoration. Over time, this phenomenon has transformed into a real form of artistic expression, even crossing cultural and geographical boundaries 1 . Many names of well-known artists are included in the ranks of graffiti writers, from Keith Haring and Jean- Michel Basquiat, who managed to bring this movement from metropolitan streets to art galleries, to Banksy. This anonymous English writer and artist is considered one of the greatest exponents of street art and of the current phenomenon of “guerrilla art”, which finds expression in the street and public dimension of urban spaces by creating pieces that document the poverty of the human condition.

However, there is a very blurred distinction between what is art and what has the presumption of being art to the detriment of the community. The graffiti phenomenon is transformed from art into vandalism, when it concerns public transport, street furniture, public utility infrastructure, but also public and private buildings of historical interest. The whole world has been a victim of vandalism for years, especially in metropolises, where the problem affects urban decorum and the protection of public assets and of the artistic and architectural masterpieces that are these cities’ pride.

Few “social” weapons can be deployed against vandalism. On the other hand, technology, especially in the coating sector, offers some tools if not to counter, at least to prevent the damage of vandalism. Anti-graffiti paints are colourless, liquid or powder coatings designed to protect structures of public utility and the first 2-3 meters of buildings from street level against graffiti. How? By facilitating the cleaning of their surfaces.

Soiling with paints and/or markers constitutes serious damage for both metal and wall surfaces, because any removal system, be it mechanical or chemical, involves an alteration of their physical characteristics. Therefore, more and more clients and owners of public assets are requesting anti-graffiti protective coatings to protect surfaces against graffiti, which could deface them already a few days after inauguration.

ADAPTA has entered the landscape of anti-graffiti coatings with a new high-performance powder product for the protection of the metal surfaces of public goods, such as street furniture, train and subway wagons, buses, façades, door and window frames, and the cladding of public buildings. Based on the test carried out by various independent laboratories in Europe, the new ADAPTA Anti-Graffiti HCR has proved to be the best anti-graffiti powder coating currently on the market. 1 www.associazioneantigraffiti.it

Technical features
ADAPTA’s new specialty, Anti-Graffiti HCR (High Chemical Resistance), was developed to protect structures of public utility from disfiguring vandalism, such as graffiti made with spray paints or markers. This new powder paint enables surfaces to be cleaned with commonly used solvents, without degrading the coating itself. It can be produced in any colour and finish, including clear and metallic ones. It has good outdoor resistance and excellent chemical resistance to conventional solvents such as xylene, acetone, white spirit, and methyl ethyl ketone (MEK). The resistance degree of the latest version of ADAPTA’s Anti-Graffiti HCR powder coating to the latter solvent, in particular, is more than 24 hours: this is the biggest difference between the new ADAPTA specialty and other similar products on the market in terms of performance.

ADAPTA Anti-Graffiti HCR’s quality has been approved with extraordinary results through tests carried out by various international laboratories and in relation to different standards. 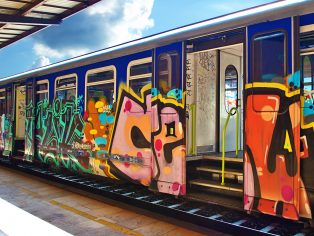