Ben Heath, principal at Grimshaw, looks at how the practice returned to the Herman Miller factory in Bath to realise its original design intent of adaptive reuse, and harness the building’s flexibility to create a new school of art and design

In responding to the significant pressures of climate change on the planet, and the rightly elevated scrutiny the built environment is under in terms of its impact, it is imperative that designers do more with less. Our buildings should perform better, with reduced carbon consumption, and lower financial costs.

The large quantities of embodied carbon within existing buildings cannot be ignored, and simply demolishing them to deliver new, more sustainable structures is rarely a cost-effective solution. The ability for buildings to flex and adapt to change has been at the heart of Grimshaw’s thinking, from the practice’s earliest work onwards. To borrow Sir Alex Gordon’s famous phrase: “long life, loose fit, low energy” – a phrase as relevant today as when he first proposed it – the longer buildings’ useful life, the more sustainable they are.

Nowhere is this better illustrated than in the Herman Miller Factory in Bath, completed in 1976 and conceived by its designers Terry Farrell and Nicholas Grimshaw as an “indeterminate building,” able to continually change and evolve in response to its current and future users’ needs. As the ultimate proof of concept, over 40 years later Grimshaw has built upon the building’s original ethos and innovative approach to adaptive reuse, repurposing it into the new School of Art and Design for Bath Spa University.

When contemplating retrofit projects, it is important to consider location, even before assessing the value of the structures themselves. Existing buildings may be close to established amenities and transport networks – often unlike peripheral development opportunities on vacant sites – promoting low carbon modes of travel, as well as wider wellbeing benefits. This was certainly the case at the former Herman Miller factory, where several bus and key cycle routes connect the site to the centre of Bath, the city’s two main railway stations, and the university’s student housing. For the new inhabitants, this dramatically reduces the reliance on car travel compared to the previous campus, with walking and cycling now the most convenient means of access for many.

The existing facade’s modular system of interchangeable solid and glass panels allowed the elevation to be easily ‘retuned’ as activities within changed – as it had been several times during the furniture manufacturer’s occupation. Beyond flexibility, the system also anticipated the potential need to adapt to future technologies, allowing the facade to be upgraded and refurbished without major intervention. To this end, we were able to dismantle, repair and respray the existing GRP panels within the building during construction, and replace the existing single-glazed windows with new bespoke double-glazed units, compatible with the retained system, but with improved energy efficiency.

The introduction of a new performative internal lining behind the GRP panels – also following a modular approach and simple fixing – provides protection to the previously exposed panels, encloses additional insulation, and offers a working surface or acoustic absorption. Through these modifications the performance of the facade has been dramatically enhanced, yet the inherent flexibility of the system is retained, along with the embodied carbon within it.

In any retrofit project, the internal environment should offer, at the very least, the expected comfort and quality of a new building. To varying degrees, this requires that designers, clients and consultees are not overly precious about the existing fabric, recognising any constraints to the use of the building which could jeopardise its long-term future. The Herman Miller Factory’s existing roof, in poor condition and poorly insulated, was one such constraint, but in replacing it we were able to solve many of the building’s key limitations in a single intervention.

New steel Vierendeel trusses, supported by the existing primary steel structure, raise a new cross-laminated timber deck by 1 metre, with the new insulation greatly improving energy performance. Over 100 rooflights, as well as perimeter clerestory glazing, have dramatically improved the natural daylighting within the deep plan building, while the extra height allows a flexible network of services and ventilation to run at high level, above the existing structure. Partitions can be easily erected up to the existing roof beams where required, responding to the unpredictable but inevitable need for the schools to adapt to the ebb and flow of changing teaching and course requirements, in spaces that now deliver the height and light expected of high quality studio environments. In addition to these improvements to the performance of the envelope and the quality of space, PV panels on the roof, enabled by increased structural capacity, now provide around 10 per cent of the building’s required energy.

The climate emergency requires that is not only buildings that adapt, but all who are involved in the built environment, from clients to contractors, planning authorities to designers. Adaptive reuse of existing buildings is an opportunity to be embraced, rather than a risk to be avoided, and throughout this project, Bath Spa University showed the bravery and engagement needed to tackle an ambitious retrofit of a listed building.

The continued flexibility within the design ensures the university can manipulate the building to their current and future requirements. Moreover, the original building, and the energy embodied within it, has been safeguarded for generations to come, without compromise on energy performance or quality of space and use.

As with many adaptive reuse projects, the repurposing of an existing building has allowed for a unique new home for Bath School of Art and Design. A building with a depth and history that inspires its current and future users, this aspect of delight can be as critical as any metric measure in ensuring a building’s long term sustainability. As Nicholas Grimshaw said shortly after the completion of the Herman Miller Factory in 1976, “If people identify with a building and feel they can change it and live with their own changes, it will mean more to them. A building’s performance should be related to how much a person cares for it, a well-loved cardboard house will last forever.”

Ben Heath is a principal at Grimshaw 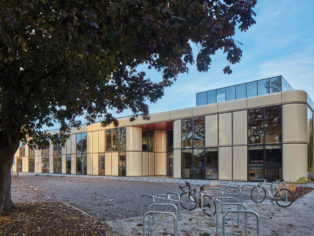 The Herman Miller Factory was conceived by its designers Terry Farrell and Nicholas Grimshaw as an “indeterminate building,” able to continually evolve 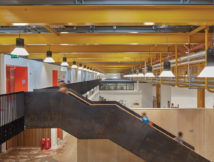