Three city parklets – specially designed by London-based architects and designers to celebrate the London Festival of Architecture (LFA) – have been unveiled across key locations in the City of London’s historic Square Mile.

The miniature landscaped spaces are the result of a competition organised by the LFA in partnership with the City of London Corporation, and are intended both to showcase fresh design talent, and raise important questions about the boundaries between the individual and public realm within the city. Architects, designers and artists were invited to submit a design proposal for a bespoke public parklet that will transform an unused kerbside space into a place to rest, relax and admire the City – bringing additional life, greenery and well-designed pedestrian amenity to the City’s streets during the world’s largest annual architecture festival.

The new city parklets and their locations are as follows:

The London Cablet by Fatkin
West Smithfield Rotunda
As the era of fossil-fuelled transport draws to a close, what happens to our vehicles at the end of their useful lives and to the spaces they occupy in our cities? Fatkin has taken a decommissioned diesel black cab and peeled it open to reveal a public place for sitting, relaxing and playing. Hardy pollution-absorbing planting provides a habitat for pollinating insects and adds colour to the street. West Smithfield rotunda is part of Culture Mile, a major destination for culture and creativity in the north west of the Square Mile stretching from Farringdon to Moorgate.

Pavement Art Gallery by Patrick McEvoy
1 St Martins le Grand
Throughout London, York stone slabs form a canvas for pavement artists. These artists draw directly onto the pavement and their illustrations only exist for a short time. Presenting flagstones on a series of timber easels, The Pavement Art Gallery enables passers-by to create their very own pavement art using the chalk provided.

The gallery was made with the help of EWM Bespoke Interiors, EWIPro, Marshalls Paving, Solid Geometry Structural Engineers, University of Westminster and Prewett Bizley Architects.

Rocks and Reeds by PARTI
Billiter Street
Using London’s history as a marshland as inspiration, Rocks and Reeds mixes local landscape with ecological construction and playful, flamboyant architecture. Material taken from an adjacent demolition works has been reused to create a whimsical bench and planter, while a collection of tall grasses and wild flowers filter the air to tackle localised pollution caused from the construction site and a nearby road.

Rocks and Reeds was made with the help of Elizabeth Tyler, IOTA Garden and Keltbray.

With the support of the City of London, each of the winning teams was awarded a budget of £6,500 to create their ‘parklet’, which will be accessible to the public for the duration of the London Festival of Architecture and beyond, remaining in place until the end of September.

“City Parklets not only showcases London’s talented pool of emerging and established architects, but also highlights often forgotten, and overlooked kerbside space as a key opportunity to address the City’s need for an increase in greenery and enhanced public realm. Each proposal has really delved deep into our 2019 theme of ‘boundaries’, creating a beautiful yet practical public space which will bring additional life to the Square Mile throughout the Festival.”

Alastair Moss, Chair of the Planning and Transportation Committee at the City of London Corporation, said:

“I’m delighted to see how these City parklets have used spaces creatively and considerately as we continue our efforts to improve the public realm across the Square Mile. In greening and re-using spaces previously occupied by vehicles, they will play a part in the City Corporation’s new Transport Strategy which highlights the importance of prioritising pedestrians.” 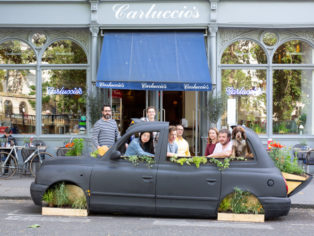