Blog: The Benefits of Fair-Faced Concrete in Residential Design with Architect/Developer Asaf Gottesman

The general benefits of a Brutalist approach using fair-faced concrete for residential schemes, and the potential applications in the UK as well as in Mediterranean examples

I have never been comfortable with the term “Brutalist” especially when coupled with “fair-faced concrete.” It always seemed to me that what typified Brutalism was not the use of concrete but rather a certain disregard for the human scale and our sensibilities. It does not mean that Brutalism is devoid of moments of beauty or refinement but the reason that the vast majority of the public dislikes Brutalist Architecture is because the impetus for the design of these monumental works was driven by certain formalistic and aesthetic considerations that had little to do with the experience of the individual.

Fair-faced concrete, on the other hand, is a totally different story. Like many of my generation I grew up in a world where concrete was the material of choice for public buildings. It was modern and visionary. It sought to introduce a new aesthetic that was both highly crafted yet minimal. Inherent to fair-faced concrete is a certain mystery; a reflective void that leaves room for the forces of light and texture to interact on its surface. Occasionally the sheer mass of the material is poetic but more often than not, it is concrete’s abstract qualities close up that are seductive.

I arrived at the use of fair-faced concrete in a roundabout way. My first project as an architect was the renovation of an urban villa in Tel-Aviv designed by the Modernist Architect Richard Kauffman. I had just graduated from the Architectural Association in London and Israel was a new adventure. It quickly became apparent to me that although there were remarkable examples of 1930’s International Style Architecture in Israel, and even some impressive 50’s and 60’s public projects, the prevailing construction culture was extremely mediocre. I identified that the weak link in the realisation chain of Architecture was the “Plasterer.” The Plasterer in Israel is not just a profession. It is a state of mind where all the mistakes and faults of the design and construction process can be skimmed over by layers of render. The plasterer enables a level of tolerance that reduced standards all across the board which results in a disregard for detailed working drawings, longer and dirtier construction processes, multiple corrections and, ultimately, higher costs.

Although fair-face concrete had been common in Israel up to the early 70’s, its popularity decreased like almost everywhere else in the world. What did remain were the basic casting skills. I believed that in order to raise the standard of the entire planning and construction process, the role of the plasterer had to be eliminated and replaced by a building process that would require greater exactitude. Since in Israel there is no wood, brick or steel culture, fair-faced concrete was my default choice.

For me, the true virtue of fair-faced concrete is not in its Tadao Ando aesthetic, nor in “Brutalist” connotations but rather in its unforgiving exactitude. Fair-faced concrete resembles the craft of etching, where every mark and gesture is recorded and revealed upon its surface. The type of material used, the quality and nature of the shuttering, as well as, the mix of sand, gravel and palette of the concrete, all determine the finish. Like in etching, however, there is always a certain element of surprise, for apart from our skills and use of materials, concrete has its own nature, or way, of reflecting the process.

My first fair-faced concrete project was my own home. I opted for milled timber as shuttering with a rougher surface on the inside in order to imprint the wooden texture on the concrete’s surface. I specified ash free cement to ensure a lighter palette. Both the building process and the end result were beautiful and, in many ways, our home launched my architectural carrier. Next I began experimenting with plywood and pigments, with OSB and white cement. I found that Marine Quality OSB shuttering with white cement offered a remarkably hard wearing, refined and rich finish to the concrete, while the use of timber planks introduces greater levels of uncertainty and is harder to repair. In spite of my admiration for Ando’s work, I avoided Tago boards for the resulting neutrality seemed to me to rob the concrete of its potential as a reflective material.

For over twenty years I have designed fair-faced concrete buildings. What has been consistent to all those projects was that the exactitude and refinement required ensured a higher quality in the design, detailing and execution. I have learnt that if the building process is not beautiful the outcome tends to be mediocre or worse. Designing fair-faced concrete buildings contributes both to the craft and cultural of the construction industry. It requires the various protagonists in the planning and realisation process to both coordinate and complete their execution drawing prior to the commencement of the project. Invariably this lengthens the design face, yet the result, at all levels, is worth it!

There is certainly an inherent power within Brutalism, as there is in other “isms” that the architectural profession is in the habit of adopting from time to time. Yet, it is crucial to underline that Architecture’s true virtue neither rests within materiality, nor imagery. Our purpose as Architects is to enrich and inspire, to ensure comfort and security, to create Architecture that serves as social, cultural and economic generators. I find that specificity rather than materiality or formalist considerations generate quality architecture and bring us closer to fulfilling Architecture’s potential. As much as I love the quiet monumentality and inherent refinement of fair-faced concrete, it is never the subject of my work. It is a means of expression similar to the way that words convey ideas and emotions. 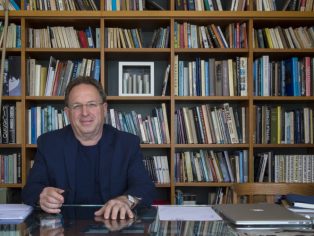 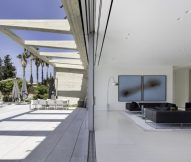 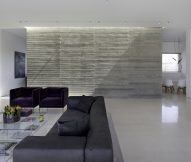