The project architect in charge of a new architecturally adventurous flagship retail store in the German city of Wuppertal explains to Jack Wooler how the practice went about revitalising a large brownfield site, and created a unique retail environment.

In the midst of a large urban redevelopment project in the centre of the German city of Wuppertal in North Rhine-Westphalia, sits City Plaza, a dramatic new five-storey store for the clothing chain Primark, has uplifted a rundown district.

Set among a mix of building styles, including modern, post-war developments alongside historic architecture, and next to improved public space linking the railway station to the city, the project has been created as a striking centrepiece to a busy urban hub. The area is used by tens of thousands of rail and bus passengers every day.

Despite such a complex backdrop, project designers Chapman Taylor were not required to follow any local vernacular building styles or special regulations, allowing them the freedom to design a consciously modern and striking building, with the aim being to avoid creating a “pastiche of Wuppertal’s heritage,” as lead architect Yvonne von Salm puts it, “but rather to add to the city’s build legacy with a new layer, firmly rooted in the present.”

Through this artistic licence, the architects have formed a distinctive curved, undulating facade, clad with alternating brass panels and glass curtain walling, lifting the area’s look and feel alongside the major ongoing works in the surrounding public realm.

It has taken six years in order to get to this point however, as von Salm explains. She tells ADF that in 2014, the City of Wuppertal launched its largest post-war urban renewal project to date – the redevelopment of the down-at-heel district around the railway station. The City of Wuppertal orchestrated a competition to develop the brownfield land here, with the process requiring interested investors to put in a financial offer for the site, supported by an architectural proposal.

Says Yvonne: “Based on the financial strength of the investor, Signature Capital, and the architectural quality of the proposal, the City then selected us as the winning team to design the area’s regeneration.”

Having worked with Signature Capital elsewhere, they were asked in this instance if they would be interested in developing an existing urban design scheme for the wider site, which was created by another firm.

After winning the contract, the architects were presented with a series of challenges, beginning with the site, which required complex and expensive works before undergoing the building’s actual construction.

Once construction started, one such early challenge for the project was that the site sits on solid rock, which had to be dynamited to allow for an underground level of car parking, service access and other facilities. “This was a time consuming, expensive, and tricky process,” tells Yvonne.

Because of this, that highway was lowered by 6 metres, and a new bridge made of steel and folded glass built, flanked on both sides by retail/food and beverage pavilions. Yvonne adds: “The new bridge transforms the pedestrian experience, seamlessly linking the station with the city centre.”

A perhaps smaller, but still significant design challenge for the architects was to reduce the size of the public square in front of the railway station, and create what the architect describes as a “much more human scale.”

“We achieved this, for example, by proposing the relocation of the main building to bring it into closer focus, Yvonne explains.

Now complete, users crossing the new, improved public realm are greeted by the new flagship store’s unique, amorphous and slanted facade, which achieves its aim of forming an architectural landmark in the city.

The curved facade of brass panels first draws the eye in with its intricacies – each panel having to be designed “individually and with care” because there couldn’t be a uniform size and shape, each panel also having a unique perforation to create a discernible pattern from the variety.

Inspiring City Plaza’s exterior here was the city’s 18th and 19th century textiles boom, details Yvonne, the practice taking in influence from the yarns, fabrics and lace that were created here, as well as the colouring of such materials.

“We decided to create a multiply, curving facade,” she says, “leaning outwards at the upper levels by 4.6 per cent (a total of 2 metres overall), which resembles the folds of curtains.”

The architect explains how this curved gold cladding, produced by German metal facade manufacturer Pohl Facade Division, fits into the surrounding vernacular: “Our ambition was to present Wuppertal as a vibrant blend of the old and the new – with a contemporary design for a striking centrepiece building which would help to achieve that in a way which would complement the wider urban context of impressive historical buildings.”

She continues: “The design was selected early on because of its ‘wow’ factor, and remained remarkably consistent from early concept stages through to completion on site.”

A cantilevered brass canopy extends from this facade – designed in keeping with the building’s geometry and using a material palette corresponding to the facade cladding – and into the ground floor of the new building; users are thereby led into the main entrance area.

Intended to cause an immediate reaction, Yvonne says that the “building serves as a statement of intent,” for the client, enabling Primark to “raise its profile in Germany and reposition itself in the market.”

With the original brief being to house multiple retail tenants and a hotel across its five above-ground floors, the building covers a 2,000 m2 plot, the extensive retail floorspace distributed across four storeys.

The entirety of what the architects describe as this “solitaire” building was leased by the clothing brand however to house the flagship store, with the tenant carrying out the interior fit out. To add to the retail space, there are office spaces on level five, as well as the basement garage and storage area on the lower ground floor.

Throughout the interiors, long sight-lines extend through and beyond the building, the expansive glazing flooding the retail and office spaces with light. “Due to the fact that it is a ‘solitaire’ building, and the extremely flexible design concept,” says Yvonne, “we’ve been able to integrate windows on all four sides wherever necessary, allowing sufficient natural daylight into the building as and when required.”

By using specialised glass, the building’s glazing enables this abundance of natural light without causing glare, as well as offering heat resistant properties to control solar gain and help reduce energy requirements in terms of cooling. Alongside this, the interiors make extensive use of LED lighting to supplement the natural light.

The entirety of this complex building was first designed in BIM by the architects, with the other contractors then able to make use of their model, as Yvonne says, “simplifying the process, preventing clashes, and saving a lot of time on the development.”

“The curved and slanting facade was a particular challenge here,” she continues, “if it wasn’t for our BIM capabilities, it might not have been possible.”

Part of this complexity was the need to make every panel individually, and ensure it took its correct place in the overall pattern. To achieve this, each panel was numbered and allocated a position on the facade, which she says was “a very complicated process.”

The finished facade was constructed using KME’s TECU brass (pre-burnished and lacquered) metal panels, and Thermoplus S1 (optiwhite) glass from German manufacturer Risse Glass across the main building, as well as Delodur (optiwhite) 8 mm across the glass entrance lobby to the store. This is built on top of the 8.10 m x 10.60 m structural grid found the basement; it’s 10.60 m x 10.60 m for the floors above ground level.

This glazed mullion-transom facade is ventilated from the rear, utilising mineral wool insulation, and clad with an underlying membrane. The facade itself consists of a multi-part substructure and cladding with pre-burnished and lacquered copper and aluminium alloy composite panels.

The facade’s brass panels are certified as an environmentally friendly building product in accordance with ISO 14025 and EN 15804. The brass material used is designed to be durable for a long life, meaning that the facade will require minimal maintenance or replacement materials.

According to Yvonne, the city’s public have already recognised the improvement that the scheme has brought about: “They are now able to walk between the railway station and the city in a seamless and much more pleasant way, and they can also see the way in which the square’s proportions have become much more human in scale.”

“More than that however,” she continues, “the design of the building lifts the area. It creates new possibilities – people now dwell and watch the world go by over a coffee or wander around exploring in a space which was previously grubby, and functional. It’s now a positive experience just to stand there and look around, and to appreciate the new sense of place that the design has created.”

The architect tells ADF that the project has also become a catalyst for further development in Wuppertal since its conception, and is now a “key reference” for discussions about how to regenerate urban centres, during what she says is “a period of uncertainty about the future of physical retail.”

This has been reflected by the sector too – Chapman Taylor’s Düsseldorf studio, together with the investor Signature Capital, won the prestigious global MAPIC Award 2019 in the ‘Best Retail City Centre Regeneration’ category, the European Property Award 2019-20 for ‘Best Retail Architecture in Germany,’ and the German Polis Award 2016 in the ‘Regenerated Town Centres’ category.

As well as achieving such industry praise, through its distinct and idiosyncratic design the practice have succeeded in creating an architectural landmark in the city of Wuppertal, and have helped transform a previously run-down area into a lively and attractive urban destination. 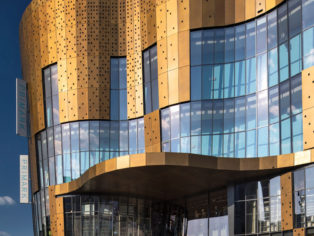 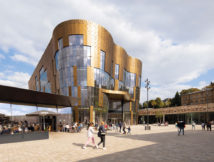 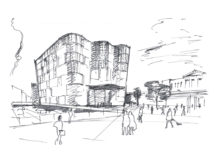 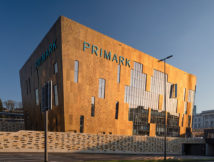 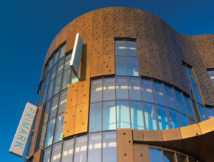 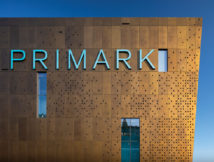 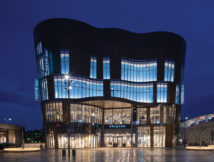