The requirement for an open cavity in ventilated facade systems can present a challenge when it comes to ensuring the passive fire safety of the building envelope. Graham Laws from Siderise Insulation looks at the issues, and suggests solutions

Also referred to as ‘rainscreen’ systems, ventilated facades are designed to protect a structure, allowing any moisture that penetrates the external facade to drain away through the gap left between the exterior and the insulation layer. In addition to preventing issues with damp or mould, the air flow within the cavity allows the whole system to stay cool in summer, warm in winter, and provides some acoustic benefits. Combine this with the huge amount of design freedom they offer, it is easy to see why these systems are a popular specification for new build and refurbishment projects of all sizes.

However, this open cavity can present a fire risk if not carefully considered. If a fire entered the wall construction, this void would act like a chimney, drawing the flames, smoke and heat up the building and causing the fire to spread to multiple floors, with obvious potentially negative consequences. To prevent this happening, there is a legal requirement for the cavity to be closed off using cavity barriers – blocks of fire-resistant material which seal the cavity to create compartments and prevent fire spread. However, this is an approach which could conflict with the daily requirement for the cavity to be open to allow ventilation.

Typically made from non-combustible (A1-rated to EN 13501-1) insulation covered with reinforced and waterproof aluminium foil faces, standard cavity barriers are ‘full-fill,’ meaning they completely seal the cavity. They are ideal for vertical applications in ventilated facades as they help to maintain the air pressure within compartments, preventing the fire from spreading horizontally around the building. However, in a horizontal application, they would prevent the system from effectively ventilating or draining away rainwater, leading to issues of damp within the building envelope.

Open-state cavity barriers were developed as a solution. These include an integral intumescent material that rapidly expands in reaction to high heat (around 130°C). This allows them to be fixed to the internal cavity wall, leaving the ventilation gap open to allow for free vertical movement of air and drainage day-to-day (sometimes referred to as the ‘cold state’). However, in the event of a fire, the intumescent ‘exfoliates’ in a matter of seconds until the void is fully closed and a robust fire seal is formed.

With such a crucial role to play in fire safety, it is vital that cavity barriers are carefully tested to ensure they meet the performance dictated by local regulation.

It is also increasingly common for specifications to go beyond the regulatory requirements, asking for 30 minutes performance for both integrity and insulation. This can be driven by several factors, from insurance or warranty requirements to project-specific requirements, or misunderstandings about what performance is required. It is also important to note that cavity barriers can only be used in conjunction with insulation whose fire performance is equivalent to or better than the type they have been tested with.

These results are gained through specific small-scale tests that examine the product’s independent performance and relevant criteria, unaffected by other system components. Standard full fill cavity barriers can be tested to EN 1366-4 fire resistance tests for service installations – Part 4: Linear joint seals. This standard determines the fire resistance of linear joint seals based on their intended end use. It tests horizontal and vertical applications and allows some movement in one direction before the test starts.

However, there is understandably some difficulty using the standardised tests to determine the performance of open state cavity barriers, as the time taken for the gap to close would initially lead to a technical ‘fail’ – even though as soon as the intumescent has activated, fire integrity and insulation is established. To help resolve this issue, the Association for Specialist Fire Protection (ASFP) produced a technical guidance document, TGD 19. This outlines the test configurations and failure criteria for testing of open-state cavity barriers and the pending prEN 1364-6 standard which is being developed specifically for cavity barriers. The test is based on the existing EN 1366-4 linear joint seal test (using the principles of EN 1363-1) but modified with upstands to better replicate the cavity construction and allows five minutes for the intumescent seal to close the gap.

Note that, even with the inclusion of cavity barriers, systems can fail if the external rainscreen facade allows the fire to spread up the outside of the building causing the cladding to move, break down or come away and leave a path for the flames to spread up and over the cavity barrier and up the cavity. Therefore, it is vital to always refer to the latest regulatory advice for facade design and specification, and to ensure high quality workmanship at every stage.

Ventilated facade systems can bring a wealth of creative potential to a project. By using modern cavity barrier products that have been designed and tested for use within these systems, designers can ensure that their buildings reap the benefits of the daily airflow, while also protecting the building envelope when it matters most. 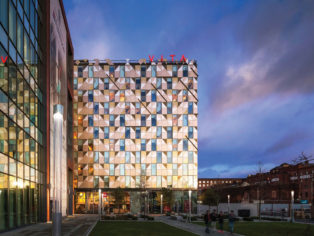