Downsizing but not out

Now more commonly associated with young professionals, bicycle-bakeries and craft beer pubs, Hackney is perhaps not the most intuitive location for an over 55s residence. The site that now hosts Quadra had been in the possession of Hanover Housing Association since the 1980s, whose former schemes included a sheltered housing scheme – one of 12 ‘Hanover in Hackney’ developments.

Hanover approached PRP in 2012, aware of the architects’ rich portfolio of later-living and retirement schemes, plus the strengths of their 40-strong office in Thames Ditton, who specialise in such typologies. The practice has had a strong presence in this sector since the 1980s, developing so-called ‘extra-care’ schemes.

The Housing our Ageing Population Panel for Innovation (HAPPI) standard produced by the UK Government was at the core of this project. As Hynds puts it:“The brief was very much HAPPI.” The standard is composed of a set of design criteria for spaces for an elder demographic, foregrounding principles such as good light, ventilation, room to move around and good storage.

Hynds comments: “We’d been designing this sort of housing for a long time before the HAPPI report, so spacious flats with good orientation – assisted tech in some cases – we’ve been doing for a long time.” He continues: “But what’s good about the report is that it looks at the influence of schemes in Europe and makes this kind of housing more mainstream.”

Midway through the briefing process, the second client Hill Homes was brought on board to manage the commercial activity surrounding the 15 private sale apartments in addition to 14 affordable units managed by Hanover, who obtained government funding for their portion.

Rights of light
In plan, Quadra is arranged in a loose arch shape, shielding a secure central courtyard and garden on the southern side of the plot. Pathways through the courtyard are delineated by grey brick paving, providing wayfinding to each of the three wings of the structure, which perforate the east and west wings towards the outer side of the arch and wrap around the building’s northern periphery.

Services are located on the ground floor at the north-east and north-west corners of the scheme, while an office, bin store and communal foyer are situated at the end of the western wing. In addition, bin stores are found at the north-west and south-east corners of the plot. The remainder of the ground floor comprises eight residential units, spanning the breadth of the plan’s contour.

The first floor features a further six apartment units; three running down either wing of the complex, leaving a gap in the centre. Hynds explains that the tightness of the plot was further constrained by it being developed on each side except to the south. “There’s a tower block on the north boundary which really complicated the rights of light model that we had to keep to.” It was essential that the new development didn’t obstruct daylight from reaching the balconies on the tower block, as well as other neighbouring properties, to any significant extent. He continues: “The other thing was the row of trees along the edge of the fields, which imposed tree constraints along the southern boundary.”

In response to the light and tree constraints, the architects decided to stagger the building’s form and distribute the massing towards the park in the south. Replicating this logic, the second floor is void of units along the northern side of the plan, as is the third, while the uppermost fourth floor features just a cluster of three units in the south-east corner of the plan. “The space constraint can also be seen as an opportunity, producing really interesting architecture – a sculpted form which denotes the transition from urban Hackney to London Fields,” says Hynds.

Stepping the volume down not only allows it to conform to the strict rights to light, but means that each of the residences benefits from park views. Each residence is also at minimum dual aspect, with a number of flats being triple aspect. Balconies are also fitted throughout the building along with full-height windows, resulting in better ventilation and greater amounts of light to apartments, and allowing Quadra to meet the HAPPI principles. “Full height windows are great for older people,” Hynds adds. “Sitting down or bed-bound – you get views out.”

During the construction phases, the tight plot posed significant challenges in terms of access for deliveries of materials, plant and the like, with access possible from only one point in the south-west corner of the site. As a consequence, the architects had to invest significant energy into negotiating with Transport For London. In addition the architects had to design a double-height space for offloading into the site. This two-storey space now houses the communal lounge.

Aesthetically, the concrete frame produces a clean and simple gridded appearance, enhanced by a series of horizontal decks and vertical bands which spill down the building at intervals along with decorative brick spines. “There’s a verticality to the scheme throughout,” Hynds notes, adding that the brick design was incorporated because it “adds more shadow to the elevations, breaking them up.”

“In terms of materiality, it’s inspired by local town houses; light-brown London stock brick with bronze metal windows, copings, and balconies.” He continues: “The townhouse is more about the materiality of brick proportions.” Decks at the second and fourth floors are clad with a light-grey stone which appears to wrap around the building, breaking it up every two floors and linking together the verticality of the scheme. The top of the fourth floor is also topped off with the same stone detailing.

A different demographic
During the briefing stages, there was a short period of deliberation as to whether over 55s or over 60s would be the target demographic for the scheme, quickly resolving to over 55s early in the briefing process. Hynds comments: “Both clients were interested in providing accommodation for the ‘younger-older’ population, as well as people in their 70s. That’s how it’s being marketed. They’re spacious flats for over 55s – people who might still be at work, and active in the community.”

The tightness of the site and its imposing surroundings to three sides meant that the client’s expectations in terms unit quantity had to be readjusted if the HAPPI space standards were to be adhered to. Hynds explains: “When we started looking at the scheme, they were looking for 45 flats. But as we worked through the rights of light issues we realised that the numbers were going to come down to 29 flats in the end, which was still considered to be viable from a commercial perspective.”

The architects were very careful in ensuring that the scheme didn’t appear institutional in any way, despite catering for an older demographic, as Hynds explains: “The feel of the scheme is more a ‘general needs’ block of apartments. It definitely doesn’t feel like a care home.” The building is however designed so it can be easily adapted for people who need assistance in their daily lives. The walls and ceilings are reinforced to cater for grab rails and other assistance equipment, plus there are three wheelchair flats which was part of Hanover Housing Association’s requirements. “The other units are adaptable, but not kitted out with those sorts of things,” says Hynds.

Sufficient space in the toilets and shower rooms was designed into the scheme in the event that tenants require a carer to assist them with daily tasks, and space under the washing basin to allow wheelchair users to access the sink. In terms of space more generally, the typical two-bed flat is over 70 m² and the smallest is 55 m². “Compared to general needs housing,” remarks Hynds, “they are spacious.”

Further accessibility is provided by the scheme’s level access throughout. Two lifts (one in the east wing and one in the west), level access showers, and wider doors also mean users can easily navigate the building in a wheelchair. Other than a single disabled vehicle parking space that gives access for deliveries and furniture for occupants, substantial onsite parking was not feasible due to space constraints. This is however offset by the extensive public transport that runs through the central London location. Says Hynds: “The location makes it naturally accessible for transport.”

A good degree of sociability has also been instilled into the scheme, with the decks and a communal lounge offering a number of spaces for fellow residents to cross paths and engage with each other. The secure central courtyard provides a private place of respite that almost flows out into the park beyond the railings, with the grass on either side establishing a visual connection with lively London Fields. Hynds adds: “There’s lots of activity in the park, giving residents the feeling that they’re part of it. You can go out and join in with those activities – it brings you into the community.”

Forecasting a trend
Hynds admits that situating later-living accommodation in the heart of bustling Hackney appears on the surface to be an unorthodox decision. Recent GLA surveys indicate that over 55s in the Borough compose only 14 per cent of the local population, compared to 45 per cent below the age of 29.

Despite this, Hynds sees a bright future for the demand of typologies nestled into urban contexts that host older occupants: “We are finding it’s becoming a lot more common. In the past, over 55s housing might be located out in the country.” He continues: “This notion that older people need peace and quiet isn’t necessarily true. Some people are used to the city and want to stay.” 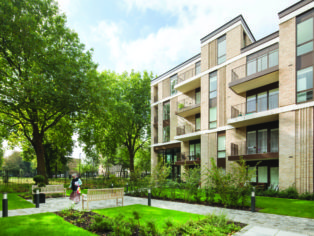