With exposing services continuing to grow in popularity in building designs, there’s an increasing focus on how to meet acoustic as well as lighting needs for workspaces, as Mike Attard of RIDI Lighting Group explains

The movement towards the removal of suspended ceilings and the exposing of services and ceiling structures has opened up many interior design possibilities. Unfortunately, it also opens up the prospect of excessive noise transmission, which is particularly unwelcome in an open plan workspace. It also presents challenges for the lighting systems too.

One popular solution is the use of vertical baffles (louvres). These not only have practical and aesthetic appeal, but also offer easy, practical access to the building services. The principle being that you can still allow an open design while giving major consideration to the building users. A perfect example is where the system was used at Newscorp, within The Shard in central London. A combination of reflective glass and open structured ceiling could make for noisy cafe and bar areas. However the specification not only worked successfully in suppressing noise but also tied in very well aesthetically, due to the imaginative use of matching colours taken from the space.

Vertical systems have long proven to be an established way to break down projected sound waves, and as such to be useful in the workspace. Designers can play with increased baffle depths or densities in order to produce the right sound absorption levels. This can be via prescriptive methods or led from the lighting design layout. Ultimately baffles combined with discrete integrated lighting modules provide a perfect ‘blank canvas’. There is also the opportunity to inject colour and texture to the space.

The blank canvas approach was successfully illustrated at the Quartermile Q3 Building in Edinburgh. Here all background lighting and acoustic standards alongside the provision of more domestic style fixtures. The result is a balance of professional looking workspace with attractive domestic accents.

Acoustic baffle lighting systems also work well to delineate various working zones, with the use of varying colours. These are proving popular in breakout spaces where different textured finishes can even be introduced, including real wood veneers. An example can be seen at the restaurant area of an international bank’s London base. Though the wood veneers have low acoustic absorption rates, the perimeter edge of the baffles is exposed to allow a degree of noise suppression. As an alternative, printed wood effects could be used which would allow full acoustic attenuation.

Finally, these systems work very well in light wells. They allow artificial light to illuminate the space by night and act as a solar glare suppressor by day – eliminating screen glare for PC users. Here it was used to good effect at the Humanities building at University of Bristol. A lot of the rooms were subterranean, and utilised large light wells to introduce light into the spaces.

The use of baffles allows hidden channels of electrical feeds to run across the glazed area whilst providing a veiling for the potential harsh light. The acoustic value of the baffles is also important where a glass ceiling is used, as glass alone will normally reflect sound.

A vertical argument that stands up
Thermal mass principles are exploited using vertical elements as they allow thermals to pass up and around them and heat or cool the building’s concrete structure. Unfortunately, flat acoustic panels will inhibit the optimum airflow in such buildings. When you then combine this with highly efficient and high output matching luminaires, the engineering design case is compelling.

An example of such a project was the Big Data Institute at Oxford University. Here the building was designed to be a highly efficient thermal mass structure, and a lighting/acoustic system was needed that was both elegant and extremely functional to contribute to the building’s thermal properties.

The 7,500 m2 medical research building, the university’s first BREEAM Outstanding building, was designed by Make Architects and can house over 550 people. It includes a concrete ‘labyrinth’ below ground which draws in exterior air, cooling or heating it using the thermal mass of the ground. Additionally, the thermal mass of the building itself is used as a sink to provide cooling throughout the day. Spectral’s Blade, a combined acoustic and lighting system, was chosen as it is specifically designed with thermal mass in mind. The project is one of the first to use the Blade II system, which allows for a continuous ribbon of light.

A vertical baffle arrangement assists thermal mass by allowing warm air to rise between the units and reach the concrete surfaces. The acoustic baffles reduce sound reverberation times; with so many exposed hard surfaces this would otherwise be overwhelming for staff. 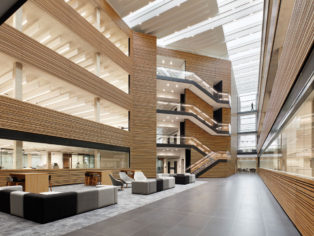