FaulknerBrowns’ outline proposals for Screen Hub UK received outline planning consent from Buckinghamshire Council via planning committee on 16 December 2021. The development is set within a richly planted campus covering a 77 acre site adjacent to the existing studios. It will include up to new film production facilities with sound stages, workshops and offices.

The development will expand the existing world-class facility, increasing capacity for film production in the UK as well as offering an international visitor attraction. It is expected that the project will result in a £355m boost to the UK economy and create over 3,500 jobs if given final approval.

Screen Hub UK will also include an education and business growth hub, established by Pinewood Studios in partnership with The National Film and Television School (NFTS). This partnership is the first of its kind globally and will develop new skills within the UK screen industry’s workforce, as well as bringing new jobs and spending to the economy.

NFTS training facilities within Screen Hub UK will be multi-functional and include shooting space to enable practical filmmaking to be taught in addition to office and teaching space, seminar rooms and workshops for hands on training sessions.

“We are so pleased to see this project approved. Our proposals for Screen Hub UK will create a unique place within the UK film industry, opening the magic of filmmaking at Pinewood Studios up to the public, but also attracting and supporting the talent of the future.” 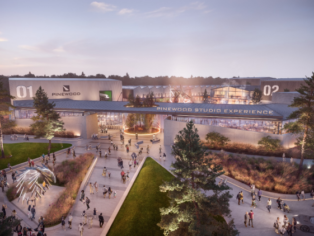