Kemper System has been named a finalist in four categories at the Liquid Roofing and Waterproofing Association (LRWA) Awards 2019.

Selected by an independent judging panel, including specifiers and technical experts, the cold-applied liquid waterproofing specialist received the highest number of nominations.

The shortlisted liquid-roofing projects include the refurbishment of an historic building’s roof carried out by All Angles Roofing, and the complex restoration of a food silo building on the banks of the River Thames, which was delivered by Capital Roofing.

In the Buried Application category, an impressive self-build home featuring two green roofs has made the final.

The fourth nomination is for Ross Smith as Trainer of the Year. With more than 40 years’ experience of the liquid roofing industry, Ross is Kemper System’s Technical Manager and has been delivering the company’s training programmes for 10 years.

Victoria Ramwell from Kemper System said: “There is a lot of strong competition this year, so we’re really proud to have made the final in so many categories. The shortlisted projects reflect the versatility of Kemper System’s products and the skills of our approved contractors.

“We are also very pleased to see Ross in the final of the Trainer of the Year category. As someone who has dedicated the vast majority of his career to the liquid roofing industry, this is a well-deserved nomination.”

Now in their third year, the LRWA Awards showcase outstanding workmanship and technical excellence across the liquid roofing and waterproofing sector. The winners will be announced at the LRWA Awards and Gala Dinner in Liverpool on Wednesday, 6 November 2019. 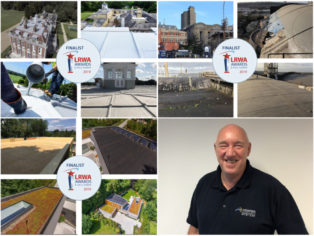