Forming a new landmark with a tiered, cantilevered roof garden, a fruit and veg market in Taiwan will revitalise the concept of selling local food in a natural environment. Winy Maas, founding partner at MVRDV, spoke to Jack Wooler about the scheme

Aiming to reinvent the perception of wholesale food markets in Taiwan, the new Tainan Xinhua Fruit and Vegetable Market is set to offer users local produce in a modern facility that itself embraces nature.

Covering 80,000 m² , with an 11,510 m² terraced and walkable green roof accessible from ground level on its eastern corner, the open-air market is intended not only to be an important hub for Tainan’s food supply chain – containing 180 market plots alongside the relevant facilities – but also to serve as a destination for meeting, socialising, and taking in views of the surrounding landscape.

With “no boundary between building and landscape,” the building is designed to be used as a platform for locals to meet, as well as to bring local produce into the area in a more sustainable way. It also sits in a location with greater accessibility than its predecessor.

Inspired by the growing attention being paid in the area to food and its sourcing, the project also aims to teach adults and children alike about food safety and production, showing people how they can grow their own produce, as well as where the food they purchase comes from.

This innovative and nature-inspired design was completed by Dutch architectural firm MVRDV, in collaboration with LLJ and Wui Yi Ling Architects. Construction is already well underway, with completion expected in September 2021.

An elevated form
Located to the east of Tainan, between the city and the mountains, the market takes “what is an often-prosaic” part of the food industry, and elevates it into a place for the public to experience food while appreciating the views of the landscape, says Winy Maas, founding partner of Dutch architectural firm MVRDV.

This design comprises a simple, open structure with high undulating ceilings that allow for plenty of natural ventilation. Above the flowing ceilings is a similarly “kinetic” terraced green roof that folds over the top of the building and reaches down to ground level.

The terraces provide an elevated platform from which visitors can “appreciate the landscape that characterises this part of Taiwan,” with sheltered spots, benches and picnic tables included to increase use.

“At the same time,” says Winy Maas, the building takes on the appearance of rolling green hills, “thus becoming a continuation of that landscape.”

The terraces’ planting has been planned to grow a different crop on each level – with terraces for pineapples, rice, roses, tea, and more. The level chosen for each type of plant has been determined by its climatic requirements.

On one side is a simple four-storey structure puncturing the roof, which contains the market’s remaining spaces, including its administrative offices, a restaurant, and an exhibition centre where agricultural products from the region can be displayed. This is “ideal for school visits,” adds Winy Maas. The addition also provides a secondary access route to the landscaped roof – with an observation field on the balcony around the office on the second floor providing views of all activities within the market.

New proposition
This project was first proposed as an alternative to the existing wholesale market, which is located in the middle of nearby city Hsinhau and had created unwanted traffic in the area.

The central Government in Tainan City instead looked to find a new location on the east of Tainan, between the city and the mountains.

Thanks to its proximity to Highway 3 and public transport links, the site chosen is easily accessible from both the surrounding farmland and the city, it being essential to the team that it be equally convenient for traders, buyers and visitors.

Alongside these gains in location, the new site will offer more functional benefits in terms of floorspace. It is hoped, for example, that the new market could increase the current trading volume of 50,000-60,000 metric tons per year to over 80,000 metric tons.

MVRDV were brought in to realise these aims due the success of its recent projects in Taiwan. These include the Tainan Axis, which revitalises central Tainan with improvements to two key streets and a new public square with a lush green lagoon, and the Taipei Twin Towers, a recently won competition for two skyscrapers which will become a focal point in the centre of the country’s capital.

“Tainan, in my opinion, is one of those towns which is so beautiful to me because maybe most of its nature, agriculture fields, farms, sea, and mountains”, comments Winy Maas.

Explaining the practice’s overall goal for the project, Maas continues: “Tainan Market can become a building that symbolises this beauty as it compliments both landscape and its surrounding environment.”

“It is completely functional and caters to the needs for auctioning, selling and buying goods, but its terraced roof with its collection of growing products will allow visitors to take in the landscape while escaping from bustle below.’’

Part of nature
Set in the countryside and surrounded by mango trees (the area hosts its own Mango Festival) the 8 acre rural plot was once a tree nursery, which the city managed to develop into the new market.

While the main internal auction and sales area is 10,000 m², the remaining 7 acres surrounding it are dedicated to support facilities such as a car park, garbage site, sewage system, refrigerator compartment, electric car recharging stalls, retention area and etc.

The construction for this large surrounding landscape construction amounts to a quarter of the total construction budget, with the rest of the main market building area costing only 35,000 NT dollars per square metre. (around €1,050/m²).

As the project takes up this natural space, it was important for the team that the market could be both a landmark and function as a “part of nature” itself.

Surrounded by the natural and green environment, the concept of ‘natural ecological compensation’ and ecological ‘island hopping’ was introduced early in order to minimise the impact of development on the environment.

To achieve this, the entire park, including the necessary hard paving and even the roof, is permeable to some extent. This makes a huge contribution to the collection and retention of rain water, alleviating both drought and heavy rainfall.

The team were keen to avoid the overuse of concrete, which aided the level of drainage further. Instead, where possible, a priority was set on attaining recyclable, lightweight and simple materials, retaining the original appearance of such materials to keep the ‘natural feel.’

Another benefit the green roof brings is that it reduces artificial metal reflection to the surrounding area, and lets birds and animals stop by on the roof to encourage wildlife.

Realisation
Achieving the combination of these elements was no simple process, however, and the market’s undulating form has taken meticulous planning in both the construction and design stages.

The main volume is built around long-span steel column beams. These were vital to reach the structural resilience necessary for the geological conditions of the site.

But an unpleasant discovery for the team was that the beams themselves were not sufficient to hold up the market’s unusual form.

The biggest challenge was that, because of cost constraints, it was impossible to directly achieve a curved structure using just these beams – they were inadequate to cope with both the stress of both the vertical office spaces and the horizontal, waved roof surfaces (which intermittently connect and disconnect at different points.)

The design’s undulating green roof could only be achieved therefore using multi-layer construction methods – the curved roof ends and the stepped edges having to be carefully studied well in advance of construction as 3D models.

As a result, the bottom of the roof is supported by multi-angle steel beams and steel plates, and the middle layer is made of reinforced concrete to form the second thin arc.

The remaining construction methods chosen utilised a stick drywall system with PVDF galvanised corrugated metal plates (made in Taiwan), and connected to the side of the roof with a transparent skylight. This composition allows sunlight through the roof from the junction to the balconies around the office.

For the floor plan, the top-most hillside surface is shaped by a thin green layer, and the steep slope at the southeast corner uses stepped flower stands and green planters to complete the greening goal.

An inspiration
These hurdles overcome, and with construction nearing completion, it is hoped that the more modern facilities will make it easier for users to shop for local produce, and for vendors to adopt auctioning goods rather than bargaining. The latter is reportedly more commonly seen in traditional markets, but restricts profitability.

Even in its current state, the project has reportedly been “very well received” by both the media and the general public already.

It functions as a public project, “besides the market company under the roof,” says Maas, He adds however that there’s a hope the city will find an operator that can manage the roof before the opening in September 2021.

Above all else, the architect seems proudest of the building’s connection to the outdoors – and its orientation towards people, their environment, and their connection with food above all else.

“We hope this will be a project that inspires people and other developments,” says Maas. “Not just in this area or in this sector, but in architecture as a whole.” 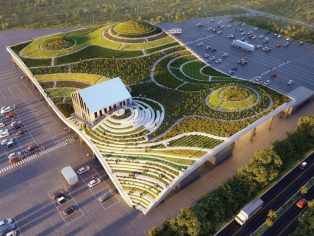 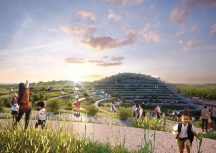 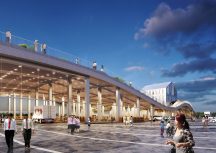 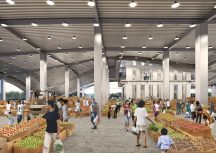