The RTA (Road and Transport Authority) in Dubai has been working towards Expo 2020 and have put in place many enhancements to the already impressive public transportation system in Dubai. This includes the Dubai bus service network covering 87% of the urban area in the Emirate of Dubai.

Luceco has provided both interior and exterior lighting solutions for these new transportation hubs. Cost effective, energy efficient luminaires supplied included the Via Road Lantern for the internal road networks. Manufactured with vandal resistant die-cast aluminium housing, Via has post-top (60mm) or side-entry mounting and the option of car park or street optics.

The internal lighting specification included LuxFrame in the waiting lounges. LuxFrame is a minimalist LED luminaire designed for suspended ceiling grid applications providing an attractive lighting effect whilst maintaining the integrity of the ceiling. Palladium Downlights were installed in Washrooms, Palladium is offered in two wattages: 6W at 560Llm and 8W at 730Llm with an efficacy of up to 94 Llm/cW. 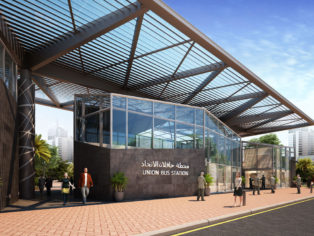