Marley Alutec has designed and supplied bespoke balcony outlets for a £30 million London development on Lea Bridge Road, known as Motion, in Walthamstow. Alutec was specified for its high quality, cost effective aluminium outlets which, due to design requirements, were adapted to enable the concealment of pipe fixings and accept square downpipes telescopically.

Designed by Pollard Thomas Edwards and built by Hill in partnership with London property developer Peabody, the flagship scheme comprises nine residential blocks of up to 18 storeys in height, offering 300 residential apartments – including 62 affordable properties.

The development implements around £33,000 of Alutec products across the nine blocks.

It was M & E Consultant Michael Howard of Green Consultancy who specified Alutec for the job. Michael commented:

“We were keen to specify metal outlets for this project due to their superior durability. The Alutec outlets proved to be a cost effective, high quality solution and Alutec’s assistance helped significantly onsite with design and logistics.”

It was the aesthetic of the building’s exterior which necessitated the creation of the bespoke outlets and the use of square downpipes. Joanna Malitzki, Architect at Pollard Thomas Edwards commented:

“The building has profiled aluminium facade which steps back on upper levels. Due to the step back, we undertook quite a few studies looking into the best layout for the rainwater system.”

Square downpipes were chosen to fit in with the angled aesthetic of the facade and concealed pipe fixings, one in the soffit void by means of a spigot and the other under the balcony decking, were used as an alternative to securing the downpipes to the facade itself. Joanna continued:

“This solution has ensured that the integrity and aesthetic of the facade has been maintained.”

Early collaboration on the project meant that Alutec was able to adapt its roof outlets to suit the needs of the project.

“To create a solution, Alutec designed the welded square spigot and produced it offsite to the required length and profile. By adapting the products in the factory, Alutec saved us significant time on site when compared to a traditional on-site adaption.”

“The result is very tidy with no visible fixings and the help we received from the Alutec team was excellent. Alutec even created unique product codes for the outlets and inputted them on the schedule of works which all contributed towards a smooth installation.”

The project, which began in late 2017 is now complete. 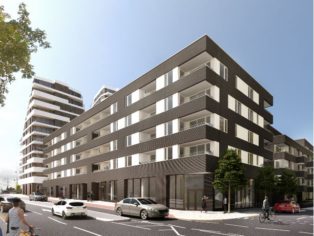 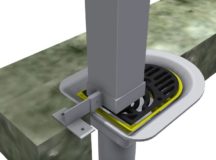