Continuing the ongoing partnership with the Royal Institute of British Architects (RIBA), the line-up now includes globally recognised architects Eduardo Souto de Moura and Dorte Mandrup for the London talks, Yasmeen Lari with a lecture at the V&A Dundee and Ben van Berkel from UNStudio in Istanbul.

The 2019-2020 programme of RIBA + VitrA Talks started earlier this month with a sold-out lecture from Craig Edward Dykers and Kjetil Trædal Thorsen from Snøhetta Architects. The series will continue on Tuesday 10 December in London with a talk from Eduardo Souto de Moura, followed by Dorte Mandrup on Tuesday 28 January.

On Tuesday 18 February, the RIBA + VitrA Talks will travel to the V&A Dundee for an evening with Yasmeen Lari. In 1963, she became the first woman to qualify as an architect in Pakistan, after training in the UK at the Oxford School of Architecture. Before officially retiring from practice in 2000, she designed many of Pakistan’s landmark modern commercial buildings. Lari will talk about what she calls ‘anti-architecture’, a concept she has developed to refer to zero-carbon structures in disaster areas of Pakistan.

Following the success of Daniel Libeskind’s talk in Istanbul in April 2019, Ben van Berkel of UNStudio will speak in the city’s UNIQ Hall on Tuesday 3 March. Van Berkel founded the practice with Caroline Bos in 1988 and has grown into an international architectural design network with offices in Amsterdam, Shanghai, Hong Kong and Frankfurt. During his talk, Van Berkel will be introducing some of the practice’s completed projects and will present the studio’s recent research about architecture and the built environment.

All events will be followed by a Q&A with the audience. 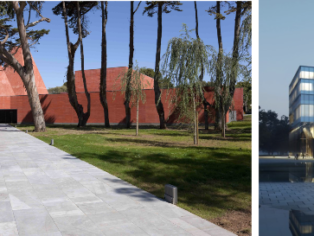