The original York Railway Station was built within the City Walls, adjacent to where the current station now stands. Opened in 1839 by the North Midland Railway, the structure only served trains to and from the south and the northern coalfields. However by 1873, as more passenger and goods lines were built into York, a larger station, from which trains could gain access from all directions, was needed.

Opening in 1877, the new York Station took three years to rebuild. Designed by the North Eastern Railway’s architect Thomas Prosser, the curved 800ft-long train-shed roof, supported by iron columns, arched 42ft above the platforms. The station was immediately hailed as one of the great buildings in Victorian era. At the time, it was the largest railway station in the world with four massive arches and thirteen platforms.

Today, the structure still impresses. Serving the busy East Coast mainline route, primarily between Glasgow Aberdeen, Edinburgh and London it is also a vital cross-route link between Glasgow, Manchester and Liverpool.  The station currently copes with around 800 trains and thousands of passengers each week. With so many passengers using the station, the extended platforms, which project out from the original arched structure, are as busy as ever. The platform surfaces have been designed to gently slope inward away from the track so any surface water naturally drains towards their centre. Effective drainage of these roofed and un-roofed “outer” areas was a major safety consideration.

Hauraton RECYFIX® STANDARD 100 channels were chosen for the slightly curving platforms – see photographs. The 271 metres of channelling installed were made from the company’s tough recycled Polyethylene-Polypropylene (PE-PP), all fitted with Class C 250 ductile iron “heel-safe” gratings finished in a Black anti-oxidisation coating. As each one metre unit only weighs just over 6kg, including the grating, contractor C. Spencer Limited was impressed with the ease and speed of installing the channels as all the units used easily complied with manual lifting regulations. 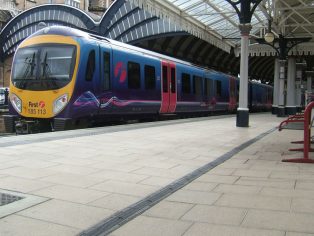