A rebrand of a fast-growing practice gave it a facelift and left staff re-energised. Sébastien Reed speaks to Apt’s studio leader Jason Geen

“It wasn’t the best time to set up a studio,” says Jason Geen, studio leader at Apt. “We were founded in 2009 in the months leading up to the world banking crash, and lack of trust in the stock market.” Despite these potentially turbulent beginnings under the practice’s former names – first Robin Partington Architects, then Robin Partington & Partners – the firm was a success. Founder Robin Partington established the studio after having spent his architectural career designing for renowned practices such as Hamiltons and Foster & Partners, managing to secure a series of large projects early on which went to propel the new practice into the next decade, high profile examples include Park House, a mixed use scheme opposite London’s Selfridges, and a residential scheme in Paddington, Merchant Square. “We never set out with a manifesto,” says Geen, who joined the practice in 2011, “just as the studio was really beginning to get into its stride.” From the beginning, the architects always wanted the studio to develop into “a place of trust and fun; a collaborative think-tank of all ages and experiences,” with a more pragmatic shared aim of “being problem solvers.” The architects’ recent rebrand – infusing the name Apt – marks 10 years of robust architectural output, amounting to nearly 30 projects, along with a set of other new organisational changes and a renovated vision for the future of the studio.

The studio began with Robin, the sole owner of the business, who took on all the financial commitments. After a number of years in operation, questions about success and succession, and promotions and growth began looming: “How could we prepare for this?” asks Geen rhetorically. “How could we adopt the John Lewis model – of an employee ownership trust?” He continues: “We live in this incredibly expensive city which is undergoing huge change. What we wanted to do was to get into a position where there was a completely fair structure; where if you were talented, there was nothing blocking your elevation and promotion through the studio?” The rebrand was, for the architects, a way of reflecting their new internal constitution to the outside. Since making the change to being an employee ownership trust – accompanied also by a move of studio – through which Apt retained all its staff. Geen says: “Personally, it has really energised the studio.” As for the name – Apt – the architects chose it not only on linguistic merit; being short and punchy, semantically there was a joint desire for “a single word that would communicate astuteness and resourcefulness.” Geen is also keen to clarify that: “We’re not A-P-T; we’re Apt.” At the time of the rebrand in October, the architects didn’t want to have a big press launch. Instead, clients, family, and friends were invited to a more informal big party as a celebration. “There were a few press releases, but friends promoting the rebrand produced great referrals – a positive ripple,” says Geen.

Apt – currently made up of 55 individuals – is helmed by three studio leaders; Niall Monaghan, Robin Partington and Geen himself, each of whom are involved in multiple projects at any one time. Then there are four project leaders; the “individuals who drive the talent”: James Ewen, Mark Williams-Jones, Nat Lee and Stephane Piazza. Over the years, Apt has honed a mechanism for driving an energetic approach towards each brief, having established a board of directors and a board of trustees made up of both internal and external personnel, including non-executive chairman David Hearn. In practice, “the directors report to the trust and the trustees, holding everything accountable, encouraging energy and being at the top of our game.” The architects claim to champion a “contextual response” in their approach to each brief. Over the course of a six to seven year project, the brief’s essence can gradually be manipulated or even lost. Through exploring the context of a project, Apt respond to this problem by building a project ‘manifesto’: “one sentence that becomes a key thing that excites us about the client’s brief at the project’s outset”, explains Geen. “We keep that at the head of every one of our design reviews amidst all the other opportunities and challenges that come.”

According to Apt, two emblematic words summing up their output are ‘craftsmanship’ and ‘innovation’. Geen substantiates the former referring to Merchant Square, a master plan which enveloped the design for a number of buildings: “One of the things I’m very excited about is materiality. ‘Craft’ would be what materials we thought would resonate with the people, and for Merchant Square, cast iron was chosen.” The architects experimented with the material by cooking it at various temperatures to preserve its aesthetic as well as preventing the surface from rubbing off on the clothing of users: “450 degrees celsius, 550, 600 – it would come out at different colours and textures – the whole process became a journey of material exploration.” On the subject of innovation, Geen describes a design-stage project in Hammersmith, where the client came to the architects with a brief which was ultimately about scale, the amount of space, and the type of space. Geen explains: “The innovation here appeared when we wrote our manifesto for the project – it was about what the future of the office environment was.” According to Geen, some of the most successful buildings are those which require limited architectural attention for 20-30 years after construction; those that had multiple uses over time and no fixed typology; “from office to residential to education; buildings that morph, change and adapt.” In this same vein, 66 Hammersmith Road incorporates numerous measures that will allow it, once built, to adapt in time to the specific demands of the occupier.

The future for Apt

Other more niche projects that Apt has collaborated on include a room in Oxford’s Bodleian Library, The Treasury, which houses a host of artefacts. “This was a space that we created that is about elegance and simplicity, in which the architecture became secondary. I’d love to see the studio explore more of these things.” Members of Apt’s studio also contributed to an “energised piece of collaboration” with Russian architect Alexander Brodsky on a temporary pavilion, which only had a life of four weeks. Geen notes: “Looking ahead, it would be nice to build on these smaller collaborations.” Reflecting on their progress until now, Apt has, as one of its core aims, to communicate and share its projects with a variety of audiences. As the practice’s efforts in creating inspiring architecture in the past have not gone unrewarded, Geen and his colleagues are hopeful that the rebrand will follow suit, embellishing the talent behind the name. 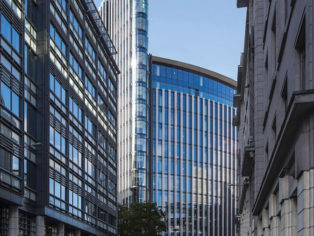