Looking to carve out a niche as a new practice, THISS Architects focus on craftsmanship, collaboration, and landscape with a goal of ensuring that no two projects are ever the same. The firm’s founders explain their working methods to Tom Boddy

Startup practice THISS Architects was founded in 2018 by long time friends Tamsin Hanke and Sash Scott. However since its inception, the east London-based practice has already been involved in some unorthodox and interesting projects – and has many exciting designs in the pipeline.

Now a full-time staff of four, the practice’s specialisms sit within the sectors of landscape, residential, and arts.

Having studied for their masters together at the Bartlett School of Architecture, both Hanke and Scott then peeled off in different directions, each gaining experience in a diverse range of settings.

While working for respected firms such as Michaelis Boyd and Niall McLaughlin Architects, Hanke has been involved with a clutch of major projects including the Sultan Nazrin Shah Centre at Oxford University which was shortlisted for the Stirling Prize in 2018. She has also ventured to far-flung places such as Siberia and Iceland, to work on schemes in “extreme landscapes, including buildings in “geothermal areas, as well as mountains.”

Scott has also had his fair share of travel, including cycling to India between his part 1 and 2, as well as working in Amsterdam for Wiel Arets Architects. Upon returning to London, practices he has worked for include Hawkins\Brown, Tonkin Liu, and TDO. While his portfolio boasts large scale projects such as a nuclear power station in Somerset, Scott has also worked on numerous smaller, “more hands-on” projects. “Over the years I’ve worked with artists such as Ivan Morison, delivering sculptures as well as small installations in places like Tate Modern, so it’s been quite a range,” Scott says.

The pair’s experience with hands-on, craft-focused projects, in some cases seeing them directly involved with fabrication as part of their aim of “understanding exactly how things are made,” has fed into the practice’s philosophy. “I got a lot more out of the smaller projects,” says Scott, “compared with the larger ones where you lose intimacy with the objects and the people making them.” With each of their projects, a lot of effort goes into understanding the craft of how things are made, pursuing all of the work with a “much more hands-on approach.”

When establishing the practice, Hanke and Scott’s vision for the work they wanted to undertake was underpinned by their background and personal interest in landscape. The relationship between “urban space and natural space” and how it fits within the larger landscape is a fascination of the pair, and fundamental in their design process. As an extension of this focus, the practice has coined the term ‘techno landscape’ – a concept that looks at how technology can disrupt and invade “a whimsical and nostalgic idea of landscape, to bring it forward and break new ground in this area,” explains Hanke.

These ideas have been integrated into a recently completed residential project, Leswin Road in north London, where the emphasis was on bringing nature into the home. The team specified a large piece of curved glass to construct a window with a seat in it, “to really expand the connection between the garden and the kitchen,” says Scott. “When you’re sitting in the window, it’s difficult to tell you’re not in the garden – it takes all of that atmospheric reflection away,” asserts Hanke.

Since Covid, this blending-nature concept has been embraced by more and more clients, who are “requesting to have a more atmospheric relationship with the outside,” in Scott’s words. And, now that the practice’s range of projects is “expanding,” the designers are starting to bring the approach to a much grander scale, with their Government-commissioned PoliNations project being a key example.

Working in a large group of costume designers, artists, and event coordinators, THISS will be in charge of spatial design and architecture for a ‘pop-up garden’ which will appear in Edinburgh and Birmingham this summer. Filled with giant artificial trees and thousands of plants, the design aims to reflect the UK’s history of migration and diversity. The practice say that their role is to “listen to the narrative of the project and coalesce it into a spatial proposal.” Hanke says “It’s not a conventional procurement, it’s more of a theatrical performance meets landscape design – so there’s a lot of fusion.”

Collaborative fusions such as this intrigue the practice’s founders, and have been a consistent feature of their work since founding. “By constantly inviting new voices into the conversation we’re establishing a sustainable, long-term educational process for us both, so we can continue to learn and evolve,” says Hanke. The practice purports to only work with clients who have the same sensibility and ideologies as them. “We bring our expertise, and the clients or designers can bring their identity to the work,” says Scott.

Their project ‘Resilient Monument’ for the Seoul Biennale of Architecture and Urbanism 2021, a collaboration with Issi Nanabeyin, an artist trained in architecture, is a demonstration of this. Influenced by the Black Lives Matter movement and the toppling of the Edward Colston statue back in 2020, the team set out to explore the role of materials used for monuments and their role in society. Historically monuments immortalise a certain moment or character in history in marble or bronze, which then “stay with the city for the next 500 years,” says Hanke.

“Issi Nanabeyin was teaching us that in Ghana, monuments don’t exist as objects but as festivals. They are much more temporary, and are kept alive by participation by the community,” says Hanke. The project explores this idea, creating monuments that can adapt to our changing culture by using impermanent and organic materials such as wood, thatch and chalk that will require a level of assembly, maintenance and stewardship through successive generations in order for ‘monuments to exist’.

The practice’s collaborative strategy results in each project being approached in a distinct way, so that the practice is “not stuck on a style or a way of working,” says Hanke. She adds: “We’re always trying something new. With each project, our goal is to learn something from it, rather than just doing copy-paste-repeat.”

In the last year, THISS have directed a large amount of their energy to sustainable design, and are now Passivhaus-certified as a practice. Their reasoning is partly to validate their claims of being an ‘eco’ firm of architects. “Everyone always says ‘we’re environmentally motivated’, but there’s very little ‘well what are you going to do about it’,” says Hanke.

The firm has two key goals for ‘future-proofing’ projects, which further add to why they don’t strictly conform to any style doctrine. These are; achieving Passivhaus certification, and creating resilient buildings that can change and adapt, “and be around for a really long time,” says Hanke. “That’s why style doesn’t motivate us – because we know buildings are going to change.” THISS’s first Passivhaus home is breaking ground this summer.

In what will be a busy period, this project will be progressing alongside several others at the practice in the coming months. Scott tells ADF: “We’re about to embark on a period of a lot of building, so managing the pressures of projects going on site is going to be a challenge, but one we’re excited about.” Despite the practice asserting the construction phase can be a stressful process, “being on site is the best place to be to get the best outcome” and “we really enjoy working with the contractor.”

Moving forward, THISS are excited about the prospect of working more in the cultural and commercial sectors, but are also eager to bring the lessons they’ve learnt from residential projects into more public sector work. They fully acknowledge that breaking into new sectors may require them to grow as a practice.

With this in mind, as they take on new projects their objective is to grow and evolve at a sustainable rate. “With scale changes as a practice, it’s vital that we try to acclimatise and settle in new areas, so we don’t lose ourselves in the process,” says Hanke. 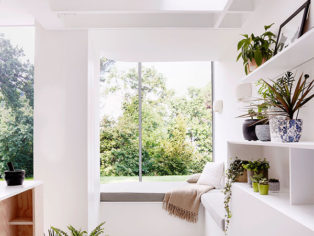 Leswin Road, north London: A residential scheme which explored blending inside and outside spaces to a achieve a new level of integration between the two 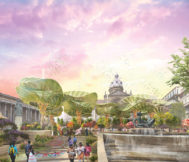 PoliNations project: A concept for a city centre “forest garden” for Birmingham Festival 2022, representing a “dazzling wonderland filled with colour, beauty and diversity”

Resilient monument: The practice designed an installation for the Seoul Biennale in 2021, with Issy Nanabeyin, exploring ideas around a new concept of monuments, post Black Lives Matter