Chilstone, makers of handcrafted architectural stone and garden ornaments in Royal Tunbridge Wells, are excited that the new statue of Princess Diana, commissioned by her sons is to reside in her favourite spot in the Sunken Garden at Kensington Palace, between two planters handmade by Chilstone.

A Statue to Commemorate Diana’s Legacy
The statue of Princess Diana was commissioned in 2017 by her sons, Prince William and Prince Harry on the 20th anniversary of her death. The statue will be unveiled on what would have been her 60th birthday on 1st July 2021. The statue is to reside in what was Diana’s favourite spot in the Sunken Gardens at Kensington Palace, where Diana lived after her wedding in 1981 until she died. The statue is “to mark her positive impact in the UK and around the world.”

Statue in Bronze
The statue has been made by Ian Rank-Broadley. His effigy of Queen Elizabeth II has appeared on all UK and Commonwealth coinage since 1998. He has also created coinage featuring Prince Charles and the Queen Mother.

Sunken Garden
The Sunken Garden was originally designed in 1908, inspired by the Pond Garden at Hampton Court. This garden was redesigned after Diana’s death as a quiet place to reflect on her life. The garden is based on a formal Dutch-style with topiary, water feature, matching planters and beds planted with tulips and summer annuals.

A Chilstone Royal CommissionChilstone were commissioned by Kensington Palace to produce twenty small planters to replicate the larger planters already in the gardens. Chilstone handcrafted the cast stone planters, as part of the updated garden design and palace refurbishment.

“We were delighted with the original commission, and it is amazing that our craftsmanship will flank the statute of the beloved ‘People’s Princess’ in such a beautiful memorial garden.”

Long Lasting
Chilstone products are handcrafted, lasting pieces, suitable for gardens of all sizes. Our cast stone can be engraved, coloured or antiqued to fit your garden design. We ship our products around the world. Our Kensington planters are available to purchase, for more details visit our show gardens in Kent by appointment or www.chilstone.com. Chilstone started on the day of the Queen’s coronation and have won multiple awards at the RHS Chelsea Flower Show over the years. Chilstone have made stonework for many clients including Hever Castle, Kew Gardens and Kensington Palace. 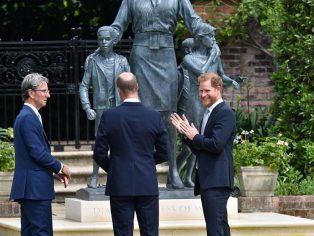