Proctor and Matthews Architects’ Heritage Centre at the heart of the major Northstowe development has been granted planning permission by Cambridgeshire County Council. The contemporary exhibition space will showcase artefacts discovered during the major archaeological excavation for Northstowe, and the simultaneous A14 upgrade by National Highways. It will consolidate these with existing local heritage collections, to create a brand-new flagship heritage centre for the region.

Designed as a venue for school visits, on-site archaeological activities, and major heritage presentations, the Heritage Centre will have a distinct identity, influenced by local architecture and heritage, as well as the history of Northstowe and the surrounding area. It will also embody the core design values of Northstowe; a new town quarter built with innovative prefabrication techniques and passive environmental sustainability measures.

Proctor and Matthews are also the architects ofthe adjacent Northstowe House, a flagship office for Homes England,the government agency overseeing the development of the Northstowe new town. The 106.5 sqm Heritage Centre will be a public focal point for the new Northstowe community, and a landmark venue within a wider network of cultural centres, as the new town evolves. It will also benefit residents of Longstanton, Oakington & Westwick and surrounding areas.

Located on the former RAF Oakington Barracks site, the Heritage Centre represents a unique partnership project between National Highways, Homes England and Cambridgeshire County Council, with support from the Longstanton & District Heritage Society. It will feature archaeological discoveries from the Northstowe and A14 excavations, ranging from prehistoric megafauna to the lost mediaeval villages of Huntingdon, and the Roman and Saxon settlements across the area. Finds going on display include objects of everyday life from The Neolithic onwards, together with objects from RAF Oakington and the surrounding area currently stored locally.

Referencing the neighbouring Northstowe House and the vernacular of Cambridgeshire black barns, the outer elevations will be clad in black corrugated metal, while the courtyard elevations will be lined in timber to provide a soft and natural finish. An external covered corridor, or loggia, will feature a distinctive contemporary timber trussed façade, loosely referencing both the cross-section of the Short Stirling aircraft wing – an aircraft once stationed at RAF Oakington, and the roof of the airfield hangars. The loggia will also provide an area for education visits, while offering solar protection and climate control of exhibition space within.

The Heritage Centre will feature a large sliding hangar door onto the landscape courtyard, and lofty internal spaces, housing an adaptable internal display area running the length of the building, to create a flexible and changing exhibition space that allows visitors to move sequentially through the space.

The building will adopt adaptive reuse strategies with the structure constructed from shipping containers using a modular construction technique, meaning it can be manufactured and assembled efficiently and sustainably, and potentially relocated to a new location at a later date. Construction is due to begin in June 2022 and complete in Autumn 2022.

“We are delighted to be moving forward with this exciting project which will provide a heritage and educational facility for the emerging Northstowe and Longstanton communities. Together with our recently completed flexible work and exhibition space for Homes England, the centre will begin to create a civic focus for the emerging new town centre.”

“It is great news that the contract for the Longstanton and Northstowe heritage facility has been awarded. This project has weathered the storm of the pandemic and it’s exciting to see it on track for completion this year. This unique project is a fantastic opportunity for people to celebrate their heritage in a way that brings a unique facility to the communities of Longstanton and Northstowe and an educational resource for Cambridgeshire.”

“We’re delighted that the idea of a centre to showcase the local heritage found during National Highways £1.5b upgrade between Cambridge and Huntingdon is being realised. At its peak, we had 250 archaeologists carefully excavating sites across the scheme helping to uncover hidden gems dating back to the Roman Period, Anglo-Saxon era and even as far back as when the dinosaurs roamed the earth.”

“Northstowe is a new town with history. Homes England recognise that a sense of belonging is important to new communities and is happy to support this new heritage / community facility on Homes England land.” 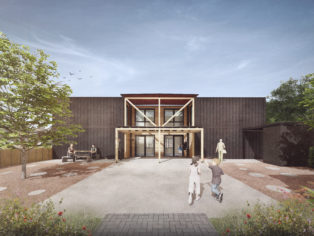